The 2018 Salzburg Easter Festival production of Puccini’s Tosca was directed by Michael Sturminger.  The only Sturminger works I’ve seen before are his rather odd Mozart collaborations with John Malkovich; The Giacomo Variations and The Infernal Comedy so I really wasn’t sure what to expect.  The production riffs off film noir and is updated to more or less the present.  It opens with a shoot out between Angelotti and the police  but that lasts only a few seconds and the first act and the first half of the second act are fairly conventional, bar Scarpia on an exercise bike as Act 2 opens.  That said, it’s big and monochromatic and it does have a noir feel.  It starts to get a bit more conceptual around the Scarpia/Tosca confrontation.  It’s an interesting take on Scarpia; perhaps more bureaucrat than psychopath.  The relationship between the two is well drawn and Anja Harteros does a really convincing job of her build up to killing Scarpia including a first class Vissi d’arte sung from some unusual positions.  There’s a hint of what’s to come at the very end of the act when an “I’m not dead yet” Scarpia is seen crawling towards his phone. 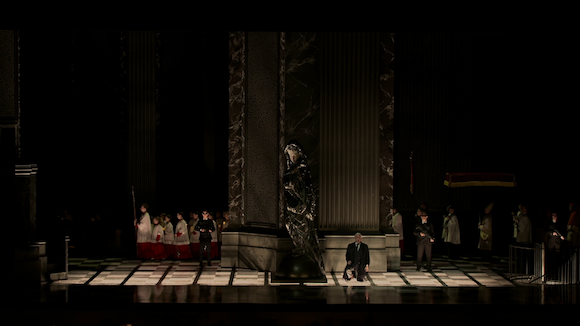