The DVD version of Michael Sturminger’s Giacomo Variations was recorded at the Ronacker Theater in Vienna in 2011.  With the exception of Florian Boesch in the baritone role it’s the same line up as the performance in Toronto that I reviewed earlier this year.  Watching the DVD didn’t change my views about the piece or the performances materially.  It still feels a bit undercooked and schematic.  I did like the quote on the DVD box about Malkovich’s singing from the Kürier “closer to Tom Waits than to Fritz Wunderlich”.  I wish I’d said that.

As a DVD it has the strengths and weaknesses of the genre.  Despite generally good video direction by Matthias Leutzendorff, the cleverness of the sets is somewhat undermined but one straining to see the expressions on the characters’ faces.  It works pretty well as a video.  Picture quality is decent and the DTS surround sound is fine though a bit rumbly on the low end.  There was no booklet in my library copy and no indication on the box that one should have been there.  There is a half hour “making of” documentary that would have benefited from more interviews and less rehearsal footage.  It’s not very illuminating.  There are English, French, German, Spanish and Italian subtitles.

There are rumours of a film version with Jonas Kaufmann.  It will be interesting to see what they change for that and how they deal with a tenor singing music that’s almost entirely written for baritone or bass-baritone. 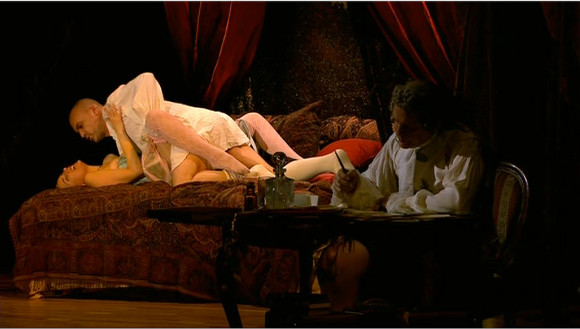 1 thought on “You think this is funny, Beauty?”