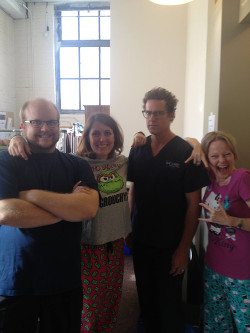 Tapestry Briefs is the product of the Composer-Librettist Workshop run annually by Tapestry.  Four composers and four librettists come up with sixteen ideas for a new opera and work up a scene from each.  Last night twelve scenes from the most recent workshop were presented in a fully staged format with piano accompaniment in Ernest Balmer Studio and adjacent Distillery spaces.  The quartet of singers for the evening was made up of some of Toronto’s top singer/actors; Carla Huhtanen, Krisztina Szabó, Keith Klassen and Peter McGillivray.  Piano accompaniment was from Gregory Oh and Jennifer Tung.

Overall the standard was very high.  All the pieces worked as short scenes and the comic ones were funny; often very funny.  What’s harder to tell for someone who wasn’t part of the creative process is whether there is enough there to turn a neat idea into a full fledged three act opera.  The strongest candidates were probably dead kings by David Yee and Jocelyn Morlock; a drama of ethnicity and hidden identity set during the Khmer Rouge terror, 1984 by Nicolas Billon and Christopher Thornborrow; a setting of the Orwell novel with some of the most interesting music of the night and The Attendant by Morris Panych and Cecilia Livingston; a piece about death, dying and their effects on the living.

That said, the fun part of the night was the comedy.  There were some very funny pieces ranging from Babel Birds by Nicolas Billon and Patrick Arteaga; in which multilingual incomprehension between three brightly coloured birds ends in a burst of feathers and lots of huffing, a little rain must fall by David Yee and Christopher Thornborrow in which Carla H. bumps off Peter M’s exes and then Peter himself and, perhaps funniest of all, Cindy + Mindy = BFFS4VR by Julie Tepperman and Christopher Thornborrow; a skit based on angsty teenage text messaging which had the audience laughing out loud.

I haven’t said a lot about the music because it’s really hard to really get into it in a maybe ten minute piece when most of one’s mind is focussed on figuring out what the piece is about.  The one piece that did really catch my ear was 1984 where the accompaniment , by Gregory Oh, was on prepared piano and was very evocative of the psychological torture scene we saw presented.

The show runs until Sunday and is well worth seeing.  Tickets are available from Tapestry ($35).