Having had a lot of fun with the Lyon recording of Orphée aux Enfers I decided to try and track down some more Offenbach operetta and managed to find a Zurich recording of La Belle Helène conducted, perhaps surprisingly, by Nikolaus Harnoncourt. 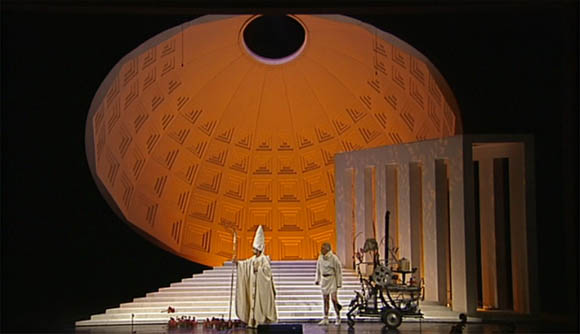 It’s not perhaps as wildly funny as the Orphée nor perhaps does it have as many memorable tunes but it’s good fun in an undemanding (at least for the audience) sort of way.  The Zurich production, by Helmut Lohner, is painted in pretty broad brush strokes.  The costumes a re very colourful, a bit silly and most have writing on them, much of it, oddly, in English.  The thunder machine is positively Heath Robinsonish.  There’s lots of stage action and fairly silly dancing around.  It’s all very fast paced and doesn’t take itself too seriously despite the sleeve notes leading one to expect more in the way of social satire.  Harnoncourt is obviously having a whale of a time and occasionally gets caught up in the stage action rather as he does in the Salzburg King Arthur.  END_OF_DOCUMENT_TOKEN_TO_BE_REPLACED