I’m not going to get to see this (obv!) but I am intrigued as it’s a concept I’ve not come across before.  Next Saturday (November 10th) Mexican-American composer, Nathan Felix, will use headphones to present his new opera titled, The War Bride, at Luminaria Contemporary Arts Festival in San Antonio Texas. There will be two performances starting at 7:30pm and 8:30pm in Hemisfair Park. Felix is known for his guerilla style approach in presenting classical music in unconventional spaces and The War Brideis given no exception, with a performance outside along the riverwalk at Hemisfair Park.

The War Bride is based on the memoir of Felix’s late grandmother, Jean Groundsell-Contreras, who married Joe Contreras during World War II in Great Britain. Joe, from Mexico, gained naturalization via serving in the US Army and after the two exchanged vows Joe remained in Germany, as Jean crossed the Atlantic pregnant and alone on the S.S. Saturnia in 1945. Jean eventually settled along the border in Nuevo Laredo with Joe joining her in late 1946. Felix recounts Jean’s tale by using the riverwalk to depict her journey across the Atlantic ocean, the Mississippi river and the Rio Grande river but he also uses the river as a metaphor for hope, division and to shed light on immigration. Jean will be played by sopranist, Elise Miller alongside baritone, Jeremiah Drake and tenor, James Dykman. Drake and Dykman will play a multiple characters in the opera including former British Prime Minister, Neville Chamberlain and former US president, Franklin D. Roosevelt. END_OF_DOCUMENT_TOKEN_TO_BE_REPLACED

Mozart’s Die Entführung aus dem Serail is perhaps the most difficult of his major operas to bring off successfully.  I dealt with some of the issues in a review of Hans Neuenfel’s production so I won’t repeat myself here.  Jérôme Deschamps and Macha Makeïff’s production for the Aix-en-Provence Festival, filmed in 2004, has several interesting features that cast an interesting light on the main characters.  The most drastic is the treatment of Osmin.  Here he’s rather dignified and far from the fat, brutal, somewhat comic lecher of convention.  That side of his character is conveyed by five, mostly silent, sidekicks.  These guys are everywhere, portraying both Osmin’s baser nature and the “walls have eyes and ears” aspects of the story.  They are made to look rather dim and get some fairly funny business to play with.  Next we have Bassa Selim played by a dancer.  This makes it easier to portray him as sensitive but not a wimp through the use of extremely virile choreography.  Clever!  Finally, both Pedrillo and Blondchen are sung by people of colour.  That can’t be a coincidence.  It certainly puts a very interesting spin on the confrontation between Osmin and Blondchen about how English girls are different from Turks.  These ideas are played out against rather dramatically colourful sets and costumes with lots of comic business to make a fast paced and enjoyable romp that makes one think just enough about the underlying meanings. 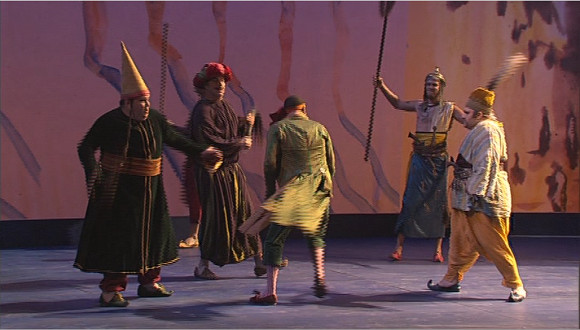