The 2013 production of Mozart’s Così fan tutte from Madrid’s Teatro Real is one of German film director Michael Haneke’s comparatively rare forays into opera.  Naturally I was expecting a highly conceptual interpretation but, although his vision is far from conventional, Konzept found I not.  What I saw was a collection of ideas that didn’t quite cohere for me.  Costume and sets are a mix of 18th century modern.  We are in Don Alfonso’s inconsistently modernised mansion.  There are enormous 18th century paintings and chandeliers but also leatherette banquettes and the Giant Fridge of Booze.  The boys and girls wear contemporary party attire, including a rather fetching red dress for Fiordiligi, but Don Alfonso is in full 18th century gard and Despina seems to be dressed as Pierrot.  Perhaps it’s some sort of party where some of the guests have decided to do the costume thing and some haven’t?  When the boys go off to the army they do so in some sort of distant past opera version of military uniform; wigs and swords.

END_OF_DOCUMENT_TOKEN_TO_BE_REPLACED

If you have ever wondered why a slapstick comedy is so called then look no further than Gilbert Deflo’s production of Prokofiev’s L’Amour des trois oranges recorded by L’Opéra de Paris in 2005.  There’s a great deal of smacking with sticks; most of it by Barry Banks who gleefully whacks just about any bottom, male or female, that comes within range.  The production is also slapstick in the generally understood sense of broad physical comedy.  There are elements of commedia del arte and lots of circus; jugglers, clowns, fire swallowers, all wrapped up in a sort of 20s vamp aesthetic.  It’s wildly chaotic in a rather fun way though it’s all a bit overwhelming and probably worked better in the theatre than on DVD. 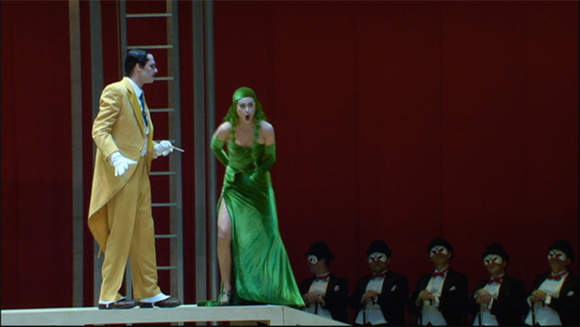 END_OF_DOCUMENT_TOKEN_TO_BE_REPLACED

The Opéra national de Paris 2005 production of Mozart’s La Clemenza di Tito is very fine.  Ironically it’s actually quite a conventional production overall though one scene, the one where Tito makes his first appearance, is so weird that it provides the generic name used in some circles I frequent for an entirely inexplicable production element (see below).

END_OF_DOCUMENT_TOKEN_TO_BE_REPLACED

Maria Ewing has always been a bit of an enigma to me. It’s the range of roles I’ve heard her in; Salome, Dido, Carmen, Rosina. Soprano to mezzo and bel canto to dramatic.  In the recording under consideration here she sings Rosina in Rossini’s Il Barbiere di Siviglia. It was recorded at Glyndebourne in 1982 when she was 32. Her performance is typical Ewing. She acts really well, looks great (if her unusual looks work for you – they do for me!)  and sings really well without ever really sounding beautiful and occasionally giving one the feeling one gets watching somebody corner a little too fast on a large motorbike. I find watching her fascinating.

The production is as traditional as one could get and makes the small, old Glyndebourne stage look even smaller. Costumes too are absolutely generic 19th century comic opera. Blocking is basic. Mostly it’s very straightforward “park and bark”. All in all it’s the sort of thing you simply wouldn’t see in a modern opera house (except maybe the Met) and I’m sure it would please the investment banker’s wife in the Salzburg King Arthur. The singing and acting, Ewing aside, backs the production up. 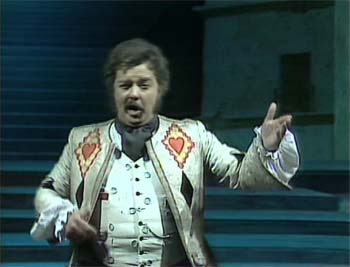 John Rawnsley is a very broad Figaro with winks and big gestures and little mincing footsteps. He sings very well indeed but he has a voice that seems two sizes too loud for the production and tends to dominate ensembles. Max-René Cosotti is the Count. He has an old fashioned Italian tenor voice that works really well in this context. The rest of the cast is perfectly OK too and there’s a bit of a bonus in that Basilio is sung by a 33 year old newcomer called Ferrucio Furlanetto. We are a million miles away from Phillip II here! The London Philharmonic are in the pit under Sylvain Cambreling. They are balanced well back from the voices but seem OK to me. All in all, this is musically quite fine, if rather old fashioned, but dramatically it’s rather like watching superior panto for adults.

Technically this disc is about what one might expect. It’s taken from an ITV broadcast and is very much video directed for small screen. The picture is barely DVD quality 4:3 and the sound is Dolby 2.0. It isn’t particularly good either being slightly muffled and with quite unrealistic balance. Subtitles are available in English, French, German and Spanish. There are no extras and minimal documentation. All in all I think one has to treat this like a dodgy mono sound recording from the 1950s. It’s worth having if one wants a record of these singers but otherwise one is better off looking for something more recent. Certainly Dario Fo’s Amsterdam production is much more fun to watch.

Alban Berg’s Wozzeck is without doubt a work of genius but it’s also a huge downer from start to finish and that can make it pretty difficult to watch. Perhaps the true measure of the 1996 recording from Frankfurter Oper is that it manages to be so consistently visually engaging that the relentless cruelty and horror becomes much more bearable. The production is described as “recorded under studio conditions from the stage of the Frankfurter Oper”. I’m not entirely sure, beyond the absence of an audience, what that means. It looks pretty much like any other DVD filmed from a stage production but maybe some of the scene to scene transitions incorporate non-stage effects. Who knows?

Director and designer Peter Mussbach offers us a largely abstract expressionist staging. Each scene takes place in a cube at centre stage, framed in neon and populated for the most part by a few shapes in primary colours. Only at the beginning of Act 3, where Wozzeck watches Marie “betray” him with the Drum Major does it just for a moment bend towards a more naturalistic aesthetic.

Costumes are similarly stark. The Hauptmann in particular wears something that looks like a red and pink chicken suit with epaulettes whereas Wozzeck is dressed in a simple white (almost) shirt and trousers. Only the drum major gets the almost realistic over the top military tailoring look. In the transitions between acts a cube filling, well, cube, apparently made of breeze block or cork or some similar textured substance, appears and spins around and does stuff before dropping back to give us a new cube set. 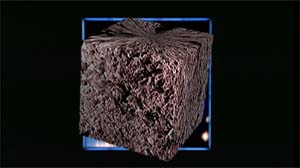 Only right at the end are there characters or scenery outside the cube, albeit grotesquely masked children, as the camera pulls back to reveal the whole artifice of the stage machinery. It’s hard to describe but it does work rather well.

The singing and acting are very good indeed. Dale Duesing gives a horrifically convincing performance as the mentally tortured Wozzeck while remaining absolutely vocally secure and even lyrical on the odd occasion he has the chance. Kristine Ciesinski is equally affecting as Marie. Dieter Bundschuh’s Captain and Frode Olsen’s Doctor are well over the top but that’s clearly what the production calls for. The acting is as stylized as the sets. Ronald Hamilton’s Drum Major is a seething mass of testosterone (is there a more unpleasant character in all of opera?). Barry Banks, as Andres, comes close to bringing a touch of sanity to proceedings and is lovely to listen to. Sylvain Cambreling conducts and is quite satisfactory.

No video director is credited so I assume Mussbach took on that role. He uses a lot of close ups but given how stark the sets are and how little is going on apart from the main characters that seems perfectly reasonable. The only place it becomes problematic is in the last scene of act 2 where there is quite a lot going on including puppet doubles for Marie and the Drum Major and a cart load of musicians. I would like to see more of the overall picture here. Small caveats aside it all works pretty well as a film. 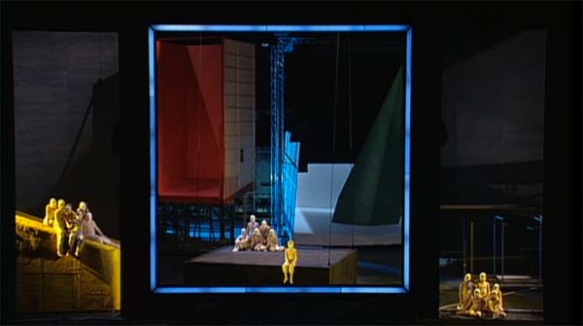 The DVD package is pretty basic. The picture is a decent quality 16:9 anamorphic. The only sound option is Dolby 2.0. The only subtitles are English and they are huge; at least twice the size they need to be, and quite intrusive. The only documentation is a chapter listing.