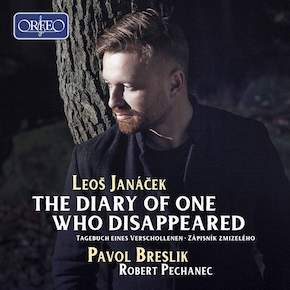 Pavol Breslik headlines on a new recording of Janáček’s Diary of One Who Disappeared; a song cycle about a young man who runs off with a gyosy girl.  The piece is given in its original arrangement which, besides tenor and piano, features a mezzo in several of the songs and a brief appearance by a three member female chorus.  No doubt this is one reason it’s performed less often than it might be.  Breslik is pretty much ideal for this music.  Obviosly he’s completely at home in Czech and he sings with clear articulation and has a rather beautiful instrument.  He’s well supported by Robert Pechanec on piano plus mezzo Ester Pavlu; who has quite a bright sound for a mezzo but works well enough with Breslik.  Dominika Hanko, Zuzanka Marczelová and Mária Kovács make up the chorus.

END_OF_DOCUMENT_TOKEN_TO_BE_REPLACED

Edita Gruberova in recent years has pretty much cut her repertoire down to a handful of bel canto roles; Elisabetta in Roberto Devereux  and the title roles in Anna Bolena, La Straniera, Norma and Lucrezia Borgia.  The last of these was recorded in Munich in 2009 in a production by Christof Loy for the Bayerisches Staatsoper.  It shows that Gruberova still very much at the height of her powers but the production is less satisfactory.

END_OF_DOCUMENT_TOKEN_TO_BE_REPLACED

Dieter Dorn’s production of Idomeneo, filmed at the Bayerisches Staatsoper in 2008 has some interesting ideas and some arresting images but ultimately it’s hard to figure out where he is trying to go.  There’s a lot to like.  He clearly places Elettra as a member of the House of Atreus which makes her more believable.  He also creates credible personalities for Ilea, Idamante, idomeneo and Arbace.  No mean feat.  Some of the images are quite arresting too.  There is lots of blood and plenty of stage action.  The sets are chaotic piles of stuff.  Idamante gets a killer sea monster hunting rig.  Then there is the ending.  Instead of finishing on the “final chorus” the chorus drape the set with white sheets and for ten minutes the orchestra play what is listed in the booklet as a ballet but there is noone on stage and nothing is happening.  Going out on ten minutes of the most boring music in the opera is just bizarre.

END_OF_DOCUMENT_TOKEN_TO_BE_REPLACED

It’s hard to fault any aspect of the new recording of Mozart’s Die Zauberflöte recorded earlier this year at the Baden-Baden festival.  The soloists are consistently good, and in some cases very good indeed, Simon Rattle is in the pit with the Berlin Philharmonic and Robert Carsen’s production is beautiful to look at and thought provoking without being pointlessly provocative.  Add to that first rate video direction and superb Blu-ray sound and picture quality and one has a disk that looks competitive even in the very crowded market for Zauberflöte recordings.

END_OF_DOCUMENT_TOKEN_TO_BE_REPLACED

Vera Nemirova’s production of Berg’s Lulu was recorded in the Haus für Mozart at Salzburg in 2010.  It’s presented in the now conventional three act version completed by Friedrich Cerha.  The sets are painterly, including in Act 1 a giant painting of the title character.  Lighting is used to create a very distinct palette for each scene and the detailed direction of the actors is careful and effective.  I didn’t see any big ideas but then on this video recording, if there had been any, they would likely have been lost in the incessant close ups and strange camera angles.  One “trick” perhaps is that much of the action in Act 3 Scene 1 takes place in the auditorium with a fair bit of confusion as the actors hand out fake cash to the punters.  This is, of course, the scene where the glitterati go broke so perhaps some irony is intended. 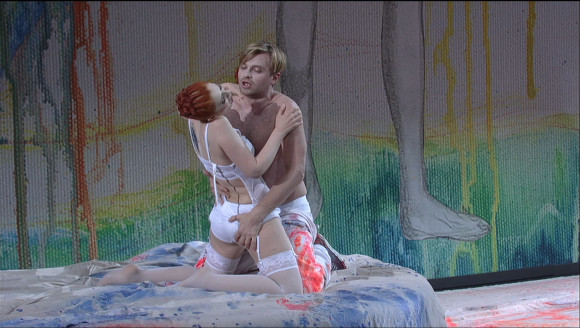