I despair.  I really do.  Yesterday’s MetHD broadcast of Verdi’s Un ballo in maschera had so much going for it.  The singing was brilliant and David Alden’s production seemed to have plenty of interesting ideas.  I say “seemed” because we only got the briefest of brief glimpses of it in between the succession of close ups served up by video director Matthew Diamond.  On the odd occasions we got to see more than a head or a body it was usually from a weird angle.  It’s particularly irritating because the two elements of the production that seemed to be most important were the ones most ruthlessly undermined.  Alden’s movement of chorus, supers and dancers and the contrast between what they do and what the principals do seems to be important but who knows?  Similarly his use of contrasting spaces, especially in Act 3, is obviously important but when the viewer gets only a couple of seconds to establish the context before the camera moves in and loses it the effect is fatally weakened. 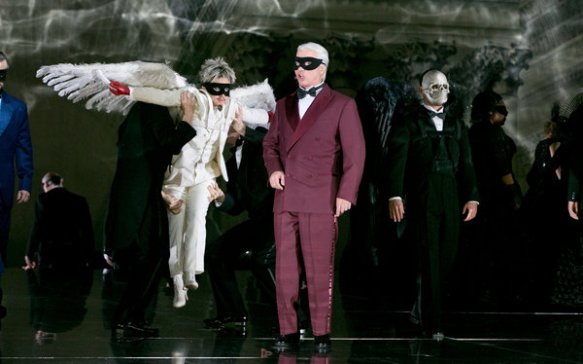 END_OF_DOCUMENT_TOKEN_TO_BE_REPLACED

Once in a while an opera performance really blows you away and it becomes quite hard to write about, especially when the work is as long and dense as Die Walküre because even with a great performance one is in overload by the end. Yesterday’s broadcast from the Met was one of those experiences. Here’s what I think I saw!