Alice Ho’s Three Songs from the Tang Dynasty set texts translated by Arthur Waley.  It’s interesting music, playing with tonality at the edges and with much of the interest in the piano part.  The vocal line is tricky and exposed and gets little help from the piano.  very much the modern “song” idiom in fact.  It was very capably performed by pianist David Eliakis and the very accomplished young soprano Maeve Palmer.  Her voice has a ways to go in terms of growth but the musicianship is definitely there.  They followed this up with an older and rather more conventional sounding set by John Beckwith; Five Lyrics of the Tang Dynasty.  The piano is more backgrounded here and the vocal line is often quite high but it’s more straightforward than the Ho piece.  Niceley done again. 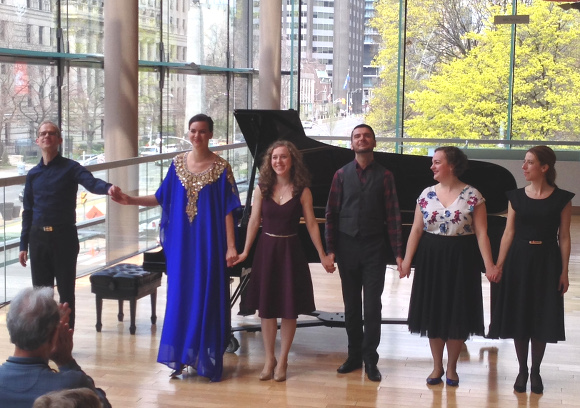 Sylvia Rickard’s When You Hear Me Singing sets four texts from various native Canadian traditions in English translation.  It’s a sophisticated, tonal piece with some tricky slides for the singer.  It’s definitely primarily a singer’s piece though the pianist gets a workout in the third number Chant to the Firefly.  Victoria Marshall’s darkish mezzo suited the music very well and she dealt skilfully with the tricky bits, as did Mélisande Sinsoulier at the piano.

The Living Spectacle was presented, as at the premier, by Ambur Braid and Stephen Philcox. It’s a really good but horribly difficult piece (see earlier review) and got another skilful and satisfying performance.