Coleman, Lemieux et Compagnie’s Against Nature presented last night at The Citadel, is another show combining vocal music and dance.  It combines two baritones; Geoff Sirett and Alexander Dobson with a dancer, Laurence Lemieux, playing a female servant.  Funny how things tend to coevolve in the arts world.  Combining vocal music with dance, once not so common, is now almost ubiquitous with productions from the likes of CASP, Against the Grain and FAWN among others. 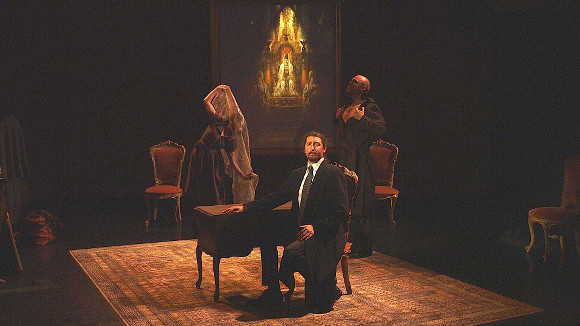 Against Nature is the story, or rather, the inner workings of the mind, of a reclusive French aesthete who withdraws from Paris to the country to engage in a rather bizarre life of contemplation.  It’s a particular view of the 19th century idea of “decadence”.  The source novel, Huysmans’ A rebours, is said to be the book that brought about Dorian Gray’s downfall.

The plot is skilfully packaged into an hour long piece by librettist Alex Poch-Goldin.  The music is by James Rolfe with choreography and direction by James Kudelka.  It’s an intriguing piece.  Dobson’s quite lyrical baritone seems very well suited to the rather other wordly protagonist as well as contrasting with the rather more stentorian tone of Sirett playing his male servant.  If Dobson carries the bulk of the vocals, Sirett is challenged to “dance” almost as much as Lemieux.  It’s not exactly a secret that Sirett is a pretty decent mover but he goes above and beyond in this piece.  Lemieux too is excellent.

The sets and costumes are painterly with a large changing image in a picture frame.  They are, literally, French bourgeois 19th century but give an impression of something much older.  Something by one of the Dutch Masters perhaps.

The music is scored for piano, violin and cello and was led by Stephen Philcox (having a busy day).  I’d really like to hear it again as last night I was too wrapped up in the stage action to really get into it.  Certainly nothing seemed out of place.  In fact there’s so much going on in a piece in which, in a sense, nothing happens that I really would need, and wish, to see it again to gain a deeper understanding of how the parts fit together.  It seemed to work very well in the very intimate space at The Citadel.  I wonder how it would look in a larger theatre.

Against Nature runs at The Citadel until May 15th.  Check colemanlemieux.com for times and tickets.