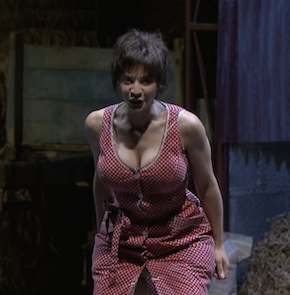 2021 was another year of parts.  Pretty much no live indoor performances before September then a few chances to get to the theatre and now, well who knows?  So what stood out for me in 2021?  Here’s a round up by category.

Not much of course but there were some good shows, though opera didn’t really figure.  The Home Project from Native Earth and Soulpepper was a thought provoking look at the the idea of “home”.  MixTape at Crow’s Theatre explored the variegated nature of relationships through the medium of the once ubiquitous mix tape.  And on a more conventional note there was a rearranged at short notice recital at Koerner hall that showcased the extremely talented Davóne Tines.

Such a varied category with content produced by everyone from major companies to small groups.  I’m not going to single out many individual shows but rather comment on producers.  I think in all these cases one can find the actual shows on either Youtube or the company website.  The COC got into its stride with some very classy, technically excellent, shows.  Soundstreams produced some of the most artistically interesting content including, especially, Garden of Vanished Pleasures and Encounters:Indigenous Voices.  Carsen Gilmore produced a couple more really good shorts and there was assorted craziness from Opera Revue, Natalya Gennadi and Tapestry among others.  In 2021 I needed all the craziness I could get.

Three disks stood out for me.  A new reworking of Gay’s The Beggar’s Opera by Robert Carsen and Bill Christie.  It’s a brilliant and very rude takedown of Brexit Britain.  I reviewed it in Opera Canada‘s Summer edition.  Then there’s Cecilia Bartoli in a rare trouser role as Ariodante at Salzburg.  It’s a gender bending production by Christoph Loy reviewed, again, for OC.  This time in the Fall edition.  Finally, one I can link to!  It’s a highly characteristic Laurent Pelly production of Offenbach’s not so well known Barbe-bleue  Yes it’s a comedy about mass murder!

I listened to a lot of really interesting new music in 2021.  In some ways typical of it was Emily D’Angelo’s debut CD enargeia (review upcoming in OC).  It’s arrangements of contemporary music by female composers with a few arrangements of Hildegard von Bingen by the same ladies and it’s very good.  That had me listening to a lot more music by Missy Mazzoli and a surprisingly large amount of contemporary Icelandic music.  Another source of inspiration was American choir The Crossing.  I’ll single out Words Adorned which features contemporary settings of medieval Andalusia texts but all of their disks are worth listening to.  In a more conventionally “classical” vein there’s Jake Heggie’s settings of texts by Margaret Atwood; Songs for Murdered Sisters.  It’s tough to listen to but this sure-to-be-classic song cycle is very well performed by Joshua Hopkins.  There’s so much really good new music being written and performed right now.