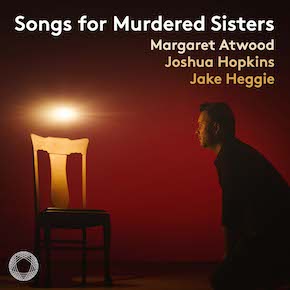 Songs for Murdered Sisters is a new song cycle by Jake Heggie setting poems by Margaret Atwood.  It came about as a result of an initiative by Canadian baritone Joshua Hopkins ,whose own sister was murdered by her ex in 2015, to raise awareness about violence against women.  It’s now been recorded by Heggie and Hopkins and will be released by Pentatone in digital format tomorrow.   It’s also available as a free video stream on the Houston Grand Opera website until March 21st.  (ETA March 18th – extended to April 30th)

Heggie conceived it as a sort of Winterreise.  The narrator is on a journey to find something; meaning? hope? reconciliation?  Who knows what it is we seek under such circumstances?  The poems are brilliant.  There are eight of them, set as seven sections in the cycle.  The music is some of Heggie’s best in my opinion.  He uses his full palette in these songs; sometimes almost hypnotic, sometimes intense and quite dissonant.  All the emotions one can imagine are there in both text and music and the performance is everything one could hope for.  It’s intensely moving almost to the point of being painful to listen to.  Definitely one of the top song cycle events of the recent past or, perhaps, the not so recent past.  This will surely become a classic.  There’s an orchestral version too though I think that’s yet to be performed.

The recording is clear, balanced and with just the right amount of resonance.  Curiously it was made at Skywalker Sound in Marin County which isn’t usually, I think, a venue for art song!  The documentation is pretty comprehensive but doesn’t include the texts.  I didn’t find that a problem.  Hopkins’ diction is excellent.

If you would like to find out more about, or show your support for, Hopkins’ campaign there’s more information at whiteribbonsisters.com.