It’s quite unusual for a production to be released twice on video but that’s what has happened with David McVicar’s production of Gounod’s Faust for the Royal Opera House.  It was originally released in 2010 with a cast that included Roberto Alagna, Bryn Terfel and Angela Gheorghiu.  It’s now been released again in a revival directed by Bruno Ravella with a cast headlined by Michael Fabiano, Erwin Schrott and Irina Lungu filmed in 2019. 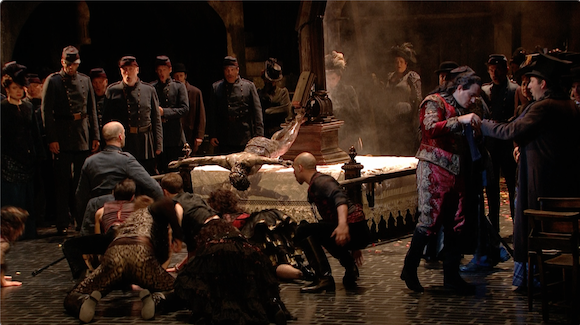 I confess that for the first four acts I thought that this is essentially for the traditionalists.  There are characteristic McVicar touches including acrobats and a general sort of hyper-kineticism and there’s a crucifix that bleeds wine in the veau d’or scene.  Faust shoots up before seducing Marguerite and a few other characteristic touches but nothing terribly thinky.  OK, maybe there’s a nod to Hammer Horror going on with Faust playing the organ in Act 4 and Mephistopheles giving Valentin the “I’ve seen that movie too” look when Valentin tries to scare him off with a cross but that’s more in joke than concept. 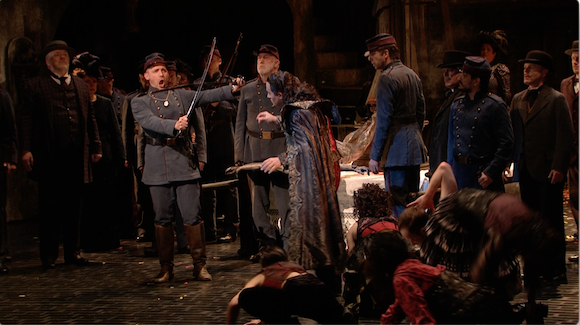 It’s the Walpurgis Night scene so that rather upsets this picture.  In some ways it’s a parody of 19th century French grand opera.  There are ballet dancers en pointe dong very conventional choreography watched by evening clothed gentlemen in the stage boxes.  But then it progresses (regresses?) through a series of nightmarish scenes; brilliantly choreographed by Michael Keegan-Doolan, until the partially undressed “gentlemen” are rather vigorously having their way with the ballerinas.  In between we get pregnant Marguerite, zombie Valentin and more.  On balance, I think this does two things; it cements the idea that this production is a sort of meta grand opera and it creates a kind of horrific lead in to the final scene that defuses some of its innate sentimentality. On the face of it this is a less starry cast than the 2010 issue but it’s actually very good.  It’s at least as good vocally and the acting is maybe deeper.  I particularly like Schrott’s Mephistopheles.  He’s very sardonic and and a bit “So yeah I’m Satan, so what?”.  Fabiano is a really good Faust with all the notes and then some.  Irina Lungu is a very well characterised and beautifully sung Marguerite.  There are no weak links elsewhere in the cast with Stéphane Degout especially good as Valentin.  The chorus is on excellent form and the corps de ballet and the dance soloists are really excellent.  Dan Ettinger’s reading of the score seems appropriate to McVicar’s vision. 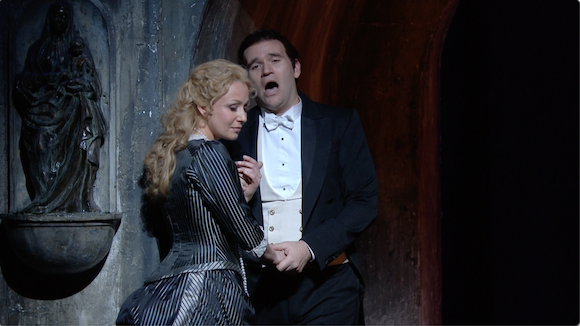 It’s not an easy show to film.  There are scenes with very low light levels and others where characters are scattered around the stage partially lit against reflective surfaces.  Rhodri Huw tries to give a fair picture of the overall stage even when that’s tricky and on Blu-ray it just about comes off.  By contrast the 2010 version was filmed with many more close-ups so the problem isn’t so apparent.  Overall though the video quality is very good (way better than the earlier version) and both stereo and surround tracks are excellent. There are a couple of useful extras on the disk.  I found the discussion between Ettinger and Schrott on the nature of Mephistopheles particularly interesting.  There’s a good essay in the booklet that notes the relationship between Gounod’s Faust and Tintin as well as a synopsis but no track listing.  Subtitles are French, English, German, Korean and Japanese. 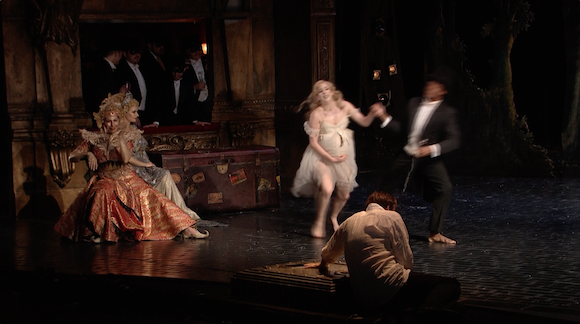 The modern video discography of Faust is interesting and makes it pretty much impossible to pick a clear winner.  There’s a 2014 version from the Met with Kaufmann, Pape and Poplovskaya which is well sung and has a production (Des MacAnuff) that makes some attempt to interrogate the piece.  It’s DVD only and based on the HD broadcast reviewed here.  There are also, of course, the two McVicar recordings.  I haven’t seen the DVD version of the earlier recording (there’s no Blu-ray) but I did see the original BBC broadcast.  The video approach is different to the later recording and technically it’s not as good but it does have Terfel’s rather different take on Mephistopheles.  I think though I would go for the new version overall.  For those in search of something even less traditional and more probing there’s the very interesting, but challenging, Salzburg recording or the surprisingly good, but not so well filmed, Turin version.