I’m ambiguous about Italian regional houses in general but what I’ve seen of the Teatro Regio Torino has impressed.  They have a fine orchestra and a chorus that can sing and act and they are not afraid to take risks.  All of that is very much in evidence on their recording of Gounod’s Faust made in 2015.  The production is designed, directed and choreographed by Stefano Poda and, like rather a lot of his work, it’s long on big architectural statements and large scale stage pictures. 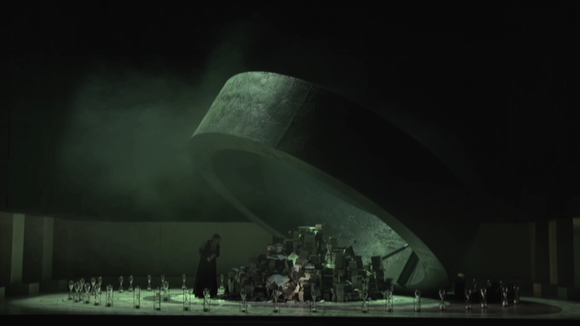 In this Faust the central feature of the design is an enormous concrete ring superimposed on a rotating stage area.  The ring can be raised and lowered and twisted and have things added to it, e.g a rather abstract white tree in Act 3.  By rigging it with ropes it even forms Marguerite’s prison.  The rotating portion of the stage is festooned with test; liturgical, alchemical, whatever.  It’s all very flexible and capable of producing some stunning effects.  His treatment of the chorus and dancers is interesting too.  Generally they are costumed in a non realistic and quite extreme way.  The ladies in Act 2 , for example, are all wearing bright red outfits that might have escaped from a Fellini film.  The dancers in the Walpurgis Night scene are all but (butt?) naked.  The choreography tends to extremes of jerky, carefully uncordinated movement often at odds with the mood of the music, for example during the Act 2 waltz.

I don’t know whether there is a dramaturgical concept here or merely an aesthetic one.  If there is a concept it’s to use visuals and movement to undermine or counteract the worst of the music’s sentimental religiosity and also perhaps to inject an unusual degree of sensuality.  Marthe here is really quite a sex kitten pursuing Méphistophéles around the concrete ring on her hands and knees.  Part of the problem with deciphering the mise en scène is the very busy video direction.  I wish I had seen this in the house.

There’s some very fine music making.  As remarked earlier this is a very fine orchestra and chorus and Gianandrea Nosada seems well in synch with both score and production.  The soloists are fine anchored by a somewhat surprisingly genial Méphistophéles from Ildat Abdrazakov.  It’s fine singing though and his relative lack of menace suits the production.  Charles Castronovo shows that he is one of today’s finest lyric tenors with a lovely nuanced portrayal of the title role and, if the Marguerite of Irina Lungu isn’t always quite in the same class it’s pretty good.  She looks perfect and manages a fantastically innocent girlish tone in the final scene.  Samantha Korbey is the solidly sung and super sexy Marthe and there are decent contributions from Ketevan Komoklidze as a boyish Siébel and Vasilij Ladjuk as a rather glowering Valentin.  I’m not sure where the dancers came from but they were excellent too.

The big problem, and it is big, here is the capture of the stage show for video.  Tiziano Mancini is way too busy.  It’s hard to grasp the whole picture Poda is trying to create.  In fact it’s quite often hard to figure out where the camera is.  There are lots of flashy video effects.  The final scene is such a cavalcade of fades and superpositions that it’s almost impossible to watch.  It’s not helped on DVD by the picture quality which is barely adequate in the darker scenes and sometimes not even that.  Get the Blu-ray version if you possibly can.  The DTS surround sound is fine and solid though.  There are no extra on the disks and the booklet from my review copy was missing so no insights there.  Subtitle options are French, English, Italian, German, Spanish, Chinese, Korean and Japanese.

There’s a lot to like on this recording but the treatment for video is really quite annoying.  It’s hard to recommend it given that. 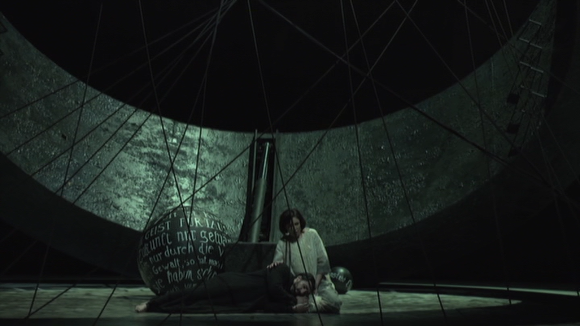