Richard Strauss’ Die Liebe der Danae is one of his least performed operas so it’s not very familiar to most opera goers.  I wrote about its performance history and provided a plot summary in my review of a 2011 recording at the Deutsche Oper, which is the only video recording besides the 2016 Salzburg one which forms the subject of this post.

For Salzburg, Alvis Hermanis designed a production that was intended to be a spectacle and which uses the vast stage of the Großes Festspielhaus to good effect.  It’s a sort of “Arabian Nights” themed affair with lots of oversize turbans and carpets and dancers on stage just about all the time.  There’s also an elephant (fake) and a donkey (not fake).  It’s very gold down to gold dancers in the first two acts.  Only in the third act does it suddenly go very white. 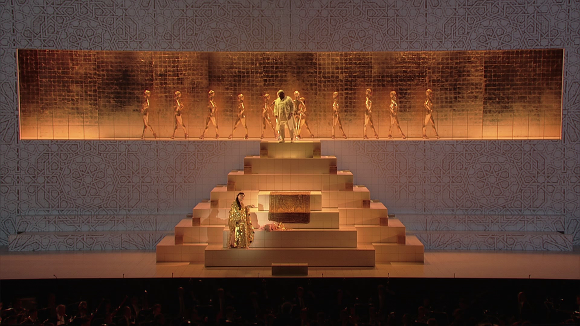 If there is any production concept beyond “spectacular orientalism” I failed to detect it.  In fact, I think the weakest things about the production are that it doesn’t have much to say and it fails to make the most of the comic potential of the scenes with Jupiter and his four exes.  I’m inclined to wonder whether the production doesn’t owe more to von Hoffmansthal’s original concept for the opera rather than the libretto, by Joseph Gregor, that Strauss actually set.  That said it really is spectacular and the designs provide a backdrop for some pretty good performances.

The stars of the show are probably Franz Welser-Möst and the Vienna Philharmonic.  They play this music beautifully and while this opera has some gorgeous orchestral passages the vocal writing is not Strauss’ most memorable except perhaps for a couple of duets for Midas and Danae.  However, it is very well sung here with Tmasz Knieczny as Jupiter leading the way (Toronto readers can catch him as Mandryka in Arabella at the COC this fall).  This is just beautiful Strauss singing.  He’s well matched by Krassimira Stoyanova as Danae who sings with great beauty of tone and accuracy throughout.  There’s also some very fine singing from Gerhard Siegel as Midas and a nicely wry Pollux from Wolfgang Ablinger-Sperrhacke.  That he’s the funniest thing on stage really points up some missed opportunities.  The queens, kings and so on are all sung by high calibre singers and there are really no weak links musically.

The production for Blu-ray is pretty much exemplary.  Agnes Méth’s video direction does justice to the scale of Hermanis’ sets and the high definition video is very good indeed, helped by the fact that it’s mostly brightly lit.  The DTS-HD-MA surround sound also does full justice to the singers and the lush orchestral work.  All in all it’s about as good as it gets.  There are no extras on the disk and the booklet has a synopsis, track listing and a not very enlightening essay.  Subtitle options are English, French, German, Italian, Spanish, Japanese and Korean.

So, how does it compare to the Berlin recording?  The Berlin production has insight and humour and younger, more decorative principals but Salzburg is markedly superior musically.  The principals are distinguished singers at the height of their powers and the orchestra is the Vienna Philharmonic playing Strauss!  Both disks are pretty much flawless technically.  Tough choice!

Note: The release date for this recording is July 21st 2017 but most of the usual suspects will take pre-orders.