Tchaikovsky’s Pique Dame is a rather odd opera.  It’s not just that the main plot turns on a pretty bizarre tale of the supernatural but that it also contains a significant number of big set piece numbers that don’t advance the plot at all; the “military children” in Act 1, the Pastoral in Act 2 and the bizarre “Glory to Catherine” chorus in Act 3 aren’t the only ones.  One assumes that they are there so that the composer could interpolate some suitably “Russian” bits because without them it’s just any other opera that happens to be in Russian. 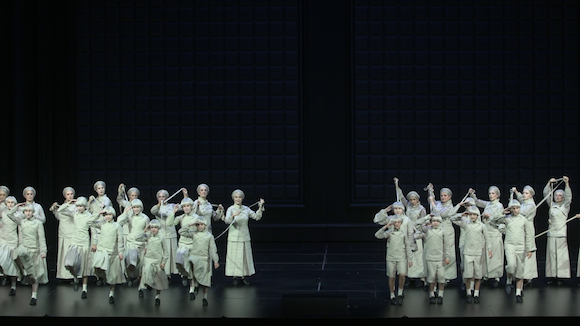 So how is a director to treat this mishmash?  Hans Neuenfels in his production for the 2018 Salzburg Festival seems just to roll with it.  The core story is told with some care for psychological detail while the extraneous elements become the vehicle for some rather weird spectacles.

The first thing one notices visually about the production is that it is extremely black and white.  Things are mostly one or the other and the background is almost always black.  The exceptions; more or less, are the principal characters.  Hermann wears a bright scarlet brocaded uniform, the Countess is a sort of shade of green, Yeletsky wears a blue uniform and Lisa is black and white at the same time.  So there’s this kind of visual duality set up from the beginning.

The “story” part of the production is very much centred on the psychological disintegration of Hermann.  He’s sung by Brendan Jovanovich and it’s a very intense and compelling portrayal though I’m not sure that having him wander around with his tunic unbuttoned to show a bare chest is very sensible.  Evgenia Muraveva is an appealing foil as Lisa.  Both of them sing extremely beautifully as well.  Veteran Hanna Schwarz brings all her years of stage experience to bear on a the role of the Countess; palpably part in the present, part in the past.  Igor Golovatenko is a most dignified Yeletsky right up to the final scene where he looks and sounds like a man desperate enough to do anything.  All in all, it’s as convincing a piece of story telling as I’ve seen for Pique Dame.

And so to the “interpolations”.  Neuenfels is clearly having some fun here and I found it easiest just to go with the weird.  The opening children’s chorus features cages full of children and wet nurses with “comedy breasts”.  The Pastoral includes characters dressed as sheep who move the furniture around and the entrance of the Tsarina to an ecstatic hymn of praise reveals the Tsarina as an oversize skeleton on a trolley.  It’s all very kinetic, well marshalled and well sung though.  Oksana Volkova as Polina/Daphnis gets some opportunities to show off a really nice Slavic mezzo and the choruses; adults from the Wiener Staatsoper and children from the Festival chorus, are really good.  Throughout Mariss Jansons conducts with sensitivity to the idiom and gets fine playing from the Wiener Philharmoniker; sometimes subtle, sometimes full blooded.

The way the choruses are set up creates quite a problem for the video director; Tiziano Mancini.  Much of the time the full, very considerable, width of the Grosses Festspielhaus stage is used.  With the black backdrops this means that if a full width shot is used on TV one sees a band maybe 15% of the height of the screen across the screen with the rest black.  It’s very odd to look at and even off Blu-ray and on a large screen detail is lost.  What sort of dog’s breakfast this looks like on standard DVD I can’t imagine.  Unsurprisingly Mancini is quite sparing with such shots and I think he’s right. 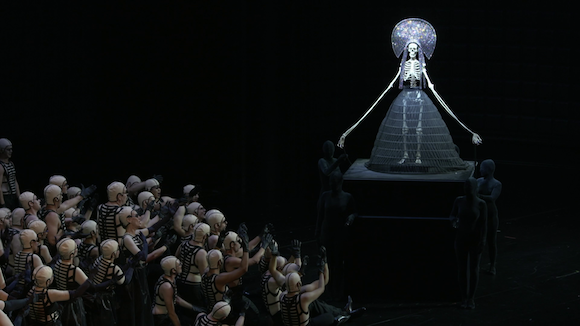 The video quality on Blu-ray is good but much of the time it’s pushed to it’s limits by very dark staging.  The sound (DTS-HD-MA and PCM 2.0) is standard modern Blu-ray quality.  The booklet has a track listing and a very brief synopsis.  The essay, for once, does deal with the production on the disk but not in a particularly helpful way.  the only extras on the disk are trailers.  Subtitle options are English, German, French, Korean and Japanese.

It’s an interesting disk with some fine performances and an interesting take on the piece.  It’s also utterly different from Stefan Herheim’s Amsterdam production and I have no idea where to start comparing the two!