Eight drinkers singing.  Or vice versa.  I forget.  Anyway, last night’s extravaganza from Tongue in Cheek Productions and Opera5 at Gallery 345 was a blast.  The schtick was that eight people got to choose a cocktail and a related song set while the audience could purchase their choice(s) of the said beverages.  There was a lot of clowning around and some very good singing all backed up by a very serious looking Trevor Chartrand at the piano.

Michael Nyby, Manhattan in hand, kicked things off with a stylish Cole Porter set (Begin the Beguine, In the Still of the Night and It’s De-Lovely) before handing over to Beste Kalender for Sesto’s arias (“Cara speme” and “Svegliatevi nel core” from Handel’s Giulio Cesare in Egitto coupled with the appropriate clammy cocktail.  Since Sesto usually gets portrayed as like 14 or something this was probably illegal before the vodka shot but this was some serious baroque mezzoing; serious ornamentation mixed with a high degree of comedy. 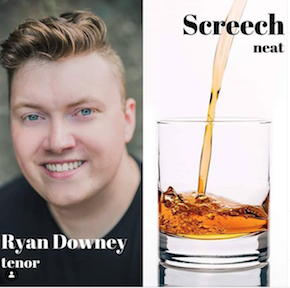 Sonya Harper Nyby was up next with a set of French chansons; Viardot, Chaminade and Fauré, accompanied by the sort of Martini (there was Chambord in there somewhere) that would have shaken James Bond but seemed to stir Sonya.  Too many sweet things for me but not inappropriate to the music.  If that was too elegant for a roughneck like me then Ryan Downey wasn’t.  three Newfoundland folk songs in the DF Cook arrangements were tossed off with the exuberance of a sou’wester off Cape St. Mary’s.  There was lots of Screech and a dollopof comedy too.

After the intermission (more booze) it was tenor River Guard with an interesting musical theatre set.  There was a number from My Fair Lady but also a couple from more recent shows which is quite unusual.  Classic Broadway finds it way into art song recitals quite a lot.  More recent stuff not so much.  Anyway River has a real flair for this material.  The cocktail, of course, was the eponym of the first show.  This was followed by Aaron Durand with a a magic themed set and a very strange looking drink called a Butterbeer.  This was a really intriguing set with a highly competent “My name is John Wellington Wells” from The Sorcerer, a Warlock song (natch) and Vaughan Williams The Ghost which is from a set I’ve never heard before.

Complete change of mood fro Rachel Krehm with three of Strauss’ Four Last Songs and a Death in the Afternoon; an absinthe and sparkling wine concoction which really didn’t taste as bad as Rachel seemed to think.  Anyway, it made me want to hear her sing these songs with orchestra and you can do that too at Christ Church Deer Park on the 25th and help out a good cause at the same time.  The final set featured Catherine Daniel with Cincos Canciones Negras by Xavier Montsalvatge along with, of course a Cuba libre.  It was a well sung and pleasingly varied conclusion to a fun concert.  They have to do this again!