Not much sign of spring as we move into the second half of the month but there are some things musical to enjoy while we await the return of the sun.  On March 18th at 2pm in Mazzoleni Hall there is You’re Welcome Rossini with the glamorous duo of Allyson McHardy and, the not seen often enough in Toronto, Lucia Cesaroni.  This one is officially sold out but there may be rushes.  Ten bucks says they do the Cat duet.
The following evening in Walter Hall at 7.30pm Krisztina Szabó, Christopher Enns, Steven Philcox feature in a program presented by the UoT Faculty of Music in association with the Canadian Art Song Project. The line up includes Ben Moore’s Dear Theo, inspired by the letter correspondence between Vincent van Gogh and his brother Theo, and John Beckwith’s Four Short Songs. The concert will also feature the premiere of Jeffrey Ryan’s Miss Carr in Seven Scenes, which draws texts from iconic Canadian artist Emily Carr’s journal entries. 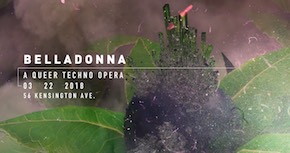 The 22nd at 8.30 pm there’s FAWN’s new techno opera Belladonna at Kensington Hall.  Saturday 24th at 8pm sees the opening of Victor Davies’ The Ecstasy of Rita Joe at the St. Lawrence Centre for the Arts.  There’s a further performance on Sunday 25th at 2.30 pm.  Based on the George Ryga play it will feature Evan Korbut, Marion Newman, Michelle Lafferty, Everett Levi Morrison, and Rose-Ellen Nichols; all Indigenous Canadian artists.  Robert Cooper conducts.  Also on the 24th at 7.30pm the University of St. Michael’s College presents The Musicians in Ordinary in a free concert of Lenten music at St. Basil’s Church, 50 St. Joseph St.  The program includes Buxtehude’s oratorio Membra Jesu Nostri.

The COC’s Not the Season Announcement Because We Already Did That bash is at the Four Seasons Centre on Wednesday 28th at 6.30pm.  And last, but certainly not least, the CanStage/Tapestry production of the Panych/Rolfe version of Panych’s version of Gogol’s The Overcoat opens at the Bluma Appel Theatre in a run that goes on through April 14th. Note that this a Musical Tailoring not an opera! (Perish the thought).  Earlier that day at 12.10pm in Walter Hall it’s the Norcop Prize recital with this year’s winner, the Ensemble Studio bound mezzo Simona Genga.