I went to see Whitney Mather sing yesterday afternoon.  It was her second masters degree performance at Walter Hall with David Eliakis at the piano.  (Probably the first time I’ve heard David play a proper piano!) 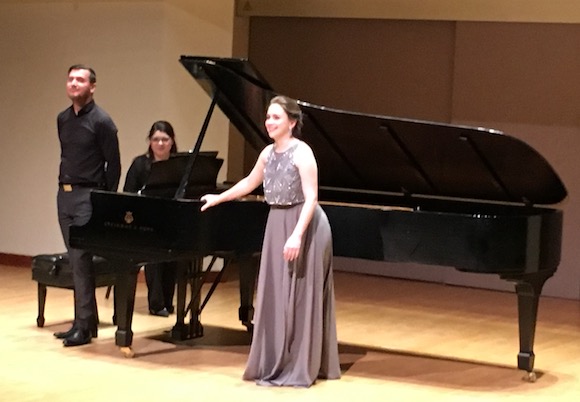 It was an interesting and well chosen program that allowed Whitney to demonstrate her musicianship and sensitivity to text.  For the most part it avoided overly obvious territory, starting with Purcell’s rarely heard The Blessed Virgin’s Expostulation which was followed by the obligatory CanCon.  In this case John Greer’s The Red Red Heart; settings of poems by Marianne Bindig.  The Purcell allowed some tasteful decoration and an opportunity to display appropriately baroque style.  The Greer, like so many modern songs, perhaps had more of interest in the piano line than for the voice but it did allow a brief coloratura flourish.

Next up were Respighi’s Quattro Rispetti Toscani to texts by Arturo Birga.  These are rather beautiful songs and should be heard more often.  Whitney brought out both the pathos and humour in the rather rustic (Tuscan dialect?) texts.

After the interval we were on more familiar ground with Schubert’s Der Hirt auf dem Felsen.  Tiago Delgado played the clarinet part quite beautifully and Whitney managed the crazy pace of the piece very well, managing to maintain a clear sense of shape and line.  She wrapped up with Milhaud’s Chansons de Ronsard.  These are a bit of a tour de force.  Some passages are really fast and much of the music lies high in the soprano range.  Whitney may not have the easiest, most beautiful, high notes ever but she does have all the notes and she hit them here with accuracy and without sense of strain.  She was particularly impressive in the crazy fast Tais-toi, babillarde.

All in all not a bad way to spend a late Saturday afternoon!

2 thoughts on “Whitney Mather in recital”