That’s what Laurent Pelly said about the idea of a Frenchman directing a French opera adaptation of a Shakespeare play for an English audience during Shakespeare 400.  Maybe he has a point but I think his 2016 production of Berlioz’ Béatrice et Bénédict probably gets as much as there is to be got out of a curiously uneven work. 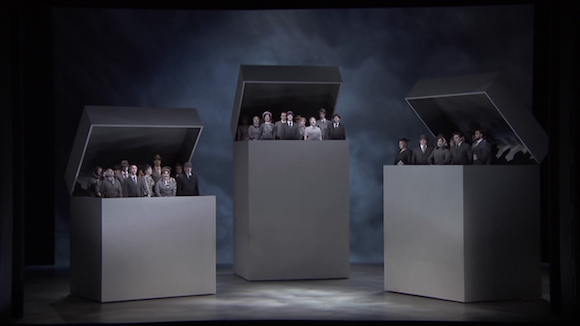 It’s based, of course, on Much Ado About Nothing and the libretto is by the composer, though I think there’s some extra dialogue added for this production.  All the dark elements are gone.  No Don John.  No stitching up of Hero on her wedding night and all that follows from that.  What’s left is a sort of bitter sweet RomCom with a straightforward love match between Héro and Claudio and everyone conspiring to persuade the title characters to admit they are actually in love with, of course, much sarcastic sparring along the way.  There’s also a heavy handed 19th century slapstick element introduced by the music master Somarone who doesn’t appear in the original play. 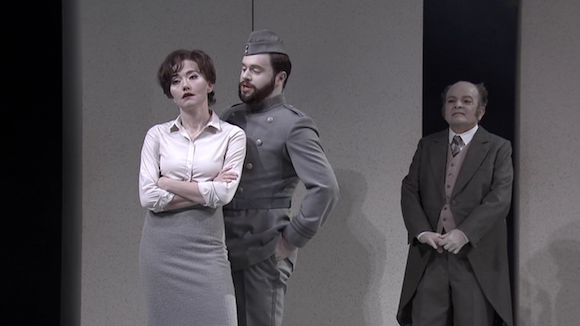 I think what makes the piece seem so uneven is the pacing.  All the plot progression takes  place in the spoken dialogue.  In between we get “numbers”.  Some of these are arias requiring great technical virtuosity like Héro’s aria early in Act 1.  Some are really beautiful like the nocturne with which Héro and Ursule close out the act (shades of Nuits d’ivresse here).  Others are quickfire ensemble numbers and yet others are either rather bombastic choruses or Somarone clowning around with the chorus.  It’s hard to get much sense of forward momentum.  (I note that the only other time I’ve seen this piece Somarone and most of the chorus antics were cut which may not be such a bad idea.)  Where Berlioz lets his undoubted talent for melody and orchestration loose it’s very lovely though.

Pelly’s production is monochrome and built around a series of giant boxes.  It seems to be set sometime in the first half of the 20th century but that doesn’t really matter.  The overall vibe is quite French, which does make sense.  The slapstick elements are laid on with a trowel with plenty of to and fro between Somarone and the conductor, orchestra and chorus.  The acting is all a touch exaggerated.  Overall, the concept serves the story well though I don’t think it really overcomes the pacing issue.

It’s a very strong cast.  Béatrice is sung by Stéphanie d’Oustrac.  I don’t think there’s a better singing actress for the French rep right now.  She’s the best I’ve seen since Dessay and she’s in top form here.  The sparks fly appropriately between here and her Bénédict sung just as well by Paul Appleby.  The straight foils are Sophie Karthäuser as Héro, Katernia Bradić as Ursule and Philippe Sly as Claudio.  Karthäuser is spot on in her long and difficult Act 1 aria with stamina and pinpoint coloratura.  She and Bradić blend beautifully in the duets.  Sly plays a slightly awkward, almost goofball, Claudio quite effectively.  Lionel Lhote, dressed and made up to look like Berlioz, clowns around rather broadly as Somarone.  I think that’s what composer and director wanted but I find it a bit tedious at times.  The Glyndebourne chorus is its usual excellent self and the LPO sounds ravishing when it needs to.  Antonello Manacorda manages the rather stop start nature of the music effectively. 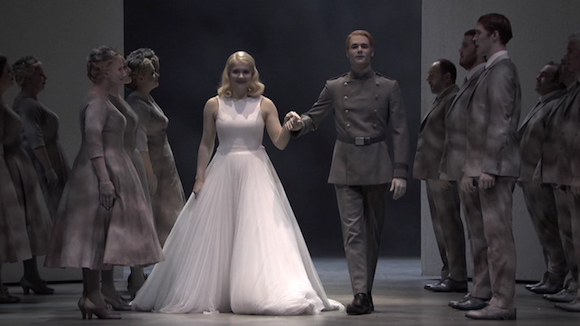 François Roussillon’s video direction is unobtrusive and serves the production well.  It’s a small stage with fairly even light levels so even on DVD (Blu-ray is available) it looks just fine.  The DTS 5.1 soundtrack is pretty good too (There’s LPCM 2.0 as well).  There’s a useful 12 minutes of bonus interviews on the disk.  The booklet has an interview with Pelly plus a scholarly essay and a synopsis.  Subtitle options are English, French, German, Japanese,and Korean. 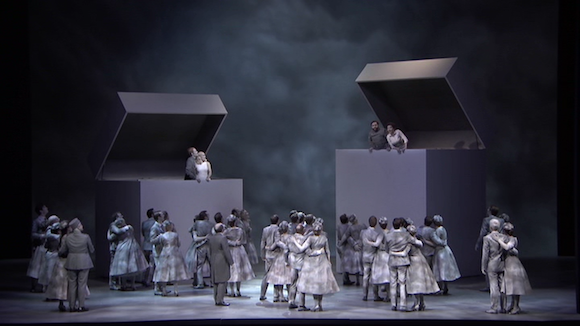 This is the only video recording of this piece currently available and I think it does justice to an interesting, if occasionally frustrating, opera.