The current Tapestry Briefs show presents work from the 2016 LibLab.  It’s all new and, inevitably, very mixed.  It started very strongly with a scene, The Call of the Light (Imam Habibi/Bobby Theodore) based on the 1984 attack on the Quebec National Assembly.  The combination of an assault rifle carrying camo clad Alex Dobson , the rest of the cast (Jacquie Woodley, Keith Klassen, Erica Iris) writhing on the floor and dissonant extended piano from Michael Shannon was genuinely disturbing.  Having a gun pointed straight at you from a few feet away doesn’t happen often at the opera.

Morning Prayer (Afarin Mansouri/Phoebe Tsang) was a much more meditative piece as Keith, playing a homosexual refugee fails miserably to write a letter to his boyfriend back home.  The next couple of pieces rather eluded me so let’s skip to Opposites Attract (Imam Habibi/Phoebe Tsang).  This is a series of very short pieces (maybe 60 seconds) about sexual attraction and frustration.  Eight were presented in all; four in the first half of the show, four after the break.  I think the main thing I got from this is that it was an interesting experiment but, for me at least, frustration won over attraction.  They were over before one had really figured out what was happening.  Playing Ball (Norbert Palej/Marcia Johnson) was more substantial with Keth Klassen more or less catatonic in a wheelchair repeatedly dropping a ball that Jacquie Woodley resignedly retrieves while vocalising and trying to read a book.  It had a desperate quality that one imagines could be developed into something more substantial. 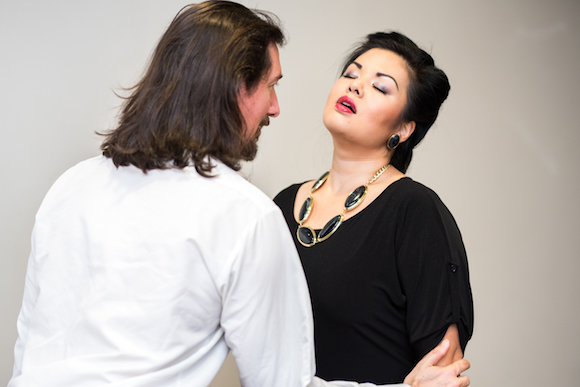 After the break the set opened with Lullabye at the Shore (Afarin Mansouri/Marcia Johnson); a lyrical piece about refugee experience for the whole cast (and a puppet/doll). It was poignant and moving.  After more Opposites Attract we got Galateo (Kit Vaughan Soden/Bobby Theodore) where Alex has to decide, in the context of a civil war, whether to terminate or let loose a killer robot he has developed a relationship with.  Otherworld (Norbert Palej/Bobby Theodore) had Alex and Keith as a rather jolly pair of miners (think very tall dwarfs) who discover a pair of green children inside a mountain.  Lots of potential for development there I think.  The final piece was The Voyeurs Journal (Norbert Palej/Phoebe Tsang) based on the true story of a hotel keeper who installs spy holes in all his bedrooms and keeps notes on his guests sexual habits for several decades.  Genuinely creepy.

So, all in all, it’s like previous Tapestry Briefs that I’ve attended.  It’s intriguing and somewhat frustrating with plenty of humour and some food for thought.  And it’s really hard to keep straight what exactly was what dramatically and pretty much impossible musically.  How the cast manage is anyone’s guess.  It’s also anyone’s guess which, if any, of these sketches might have some mileage.  I think my money would be on Otherworld.  All in all, it’s a fun way to spend an evening though.

Tapestry Briefs: Winter Shorts is playing at the Dancemakers Studio at the Distillery with further performances tonight and tomorrow at 8pm with 4pm matinees on Saturday and Sunday.