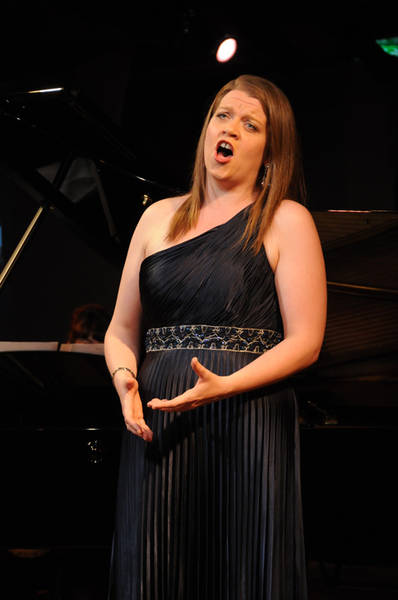 Ileana at the Stella Maris competition

It’s that time of year again. With a few months left in the opera season in Toronto today saw the first “farewell” concert by a departing member of the COC Ensemble Studio. It was a solo recital by dramatic soprano Ileana Montalbetti, quite possibly the best sounding thing ever to come out of Saskatoon. Ileana is the only full on dramatic soprano I’ve seen in the few years I’ve been following the Ensemble Studio and, as ES boss Liz Upchurch pointed out, they are rare so it’s always interesting to see another one come along. Fair to say too, I think, that it’s not the voice type that is treated most kindly by a piano recital in a fairly intimate space. That said, it was a very enjoyable performance.

Ileana kicked off with O Sachs! Mein Freund! from Die Meistersinger. Any reservations I have about dramatic sopranos and piano recitals come redoubled in spades where “big” opera arias are concerned. The kind of volume and tone needed to sing against a large orchestra in a big theatre tends not to sound too lovely when throttled back with only a piano for support and, honestly, I don’t think this piece was a great idea.

Things improved enormously in the next section though. This was the song cycle Ekho Poeta; Pushkin texts set by Benjamin Britten and written for the Rostropoviches. It’s a rarity; a Britten song cycle I don’t recall hearing before, and it’s very good. It was a much better vehicle for Ileana who displayed plenty of power, well controlled vibrato and pleasing and varied tone colours especially in the middle register. Her high end was much sweeter here than in the Wagner too. Where she needed a lot of attack, as in the rather spiteful Epigramma she could certainly produce it. Being Britten, the piano part in these pieces was really quite demanding too so kudos to pianist Rachel Andrist for excellent and sympathetic musicianship.

The second half of the programme was all Strauss. It started with Arabella’s final aria, which I enjoyed more than the Wagner but about which I have similar reservations as a recital piece.  Then we got a selection of songs from Op. 37, Op. 48 and Op. 32 before finishing up with Zueignung from Op. 10. This was all good stuff with more excellent control and very good German diction. The final number was particularly lovely. For an encore we got a spirited rendering of Sweet Polly Oliver in the Britten setting.

I think Ileana is a very considerable talent and I’m sure she’ll do well in the wider operatic world.  Liz Upchurch and the COC certainly seem to think so.  Liz  “leaked” that Ileana will be back in an as yet unannounced major role. Putting two and two together and making something like e^iπ and adding in a dose of wishful thinking I’m wondering if there is any connection between Ileana’s first piece today and the long rumoured Toronto debut of a certain ex-pat Canadian baritone.

Also, à propos not much, it was nice to see a certain world famous dramatic soprano in sneakers and sans make up watching from the standing room section.