So here we go with the “preliminary evening” of the Deutsche Oper Berlin’s new production of Wagner’s Der Ring des Nibelungen directed by Stefan Herheim.  Das Rheingold opens before the music starts with a crowd of scruffily dressed people with suitcases; presumably refugees, filling a stage which is empty except for a grand piano.  One of them starts to put on clown make up.  We will soon see that this is Alberich.  Another “refugee” sits at the piano and conjures up the first notes of the prelude from the pit.  It takes a bit longer for us to realise that this is Wotan. 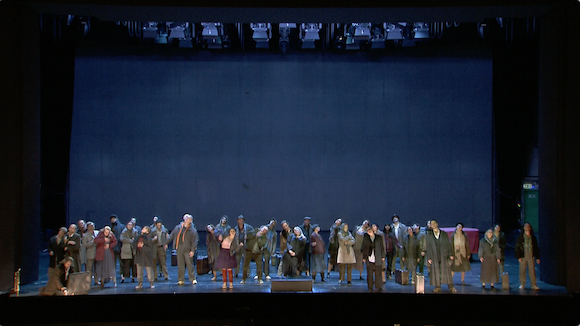 Three young women emerge from the crowd.  They are, natch, the Rhinemaidens.  Their teasing of Alberich i9s overtly sexual and as they lose items of clothing so do the people in the crowd.  Soon everyone is down to underwear and getting quite frisky.  The revealing of the gold and Alberich’s curse is done to a striking strobe inflected lighting plot with a trumpet as the old itself, echoing the trumpets in the pit.  Wotan returns to the piano and summons Freia and Fricka who appear on a lift through the piano.  We get to see exactly what is meant by Freia’s “ripe, golden apples”.  We are only half an hour into the tetralogy and already many of the ideas discussed by director Stefan Herheim are being displayed.

Freia and Fricka act very “broad” as they berate Wotan for his deal with the giants.  When they appear they are doubled by giant puppets made up of suitcases.  Wotan conjures a spear and winged helmet from the piano.  It seems that “with my spear and magic helmet” iconography is going to play a role.  Loge appears and starts setting stuff on fire.  The gods argue.  It’s pretty clear that what we have is a Power (male) vs. Love and/or Sex) (female) dichotomy being further reinforced. 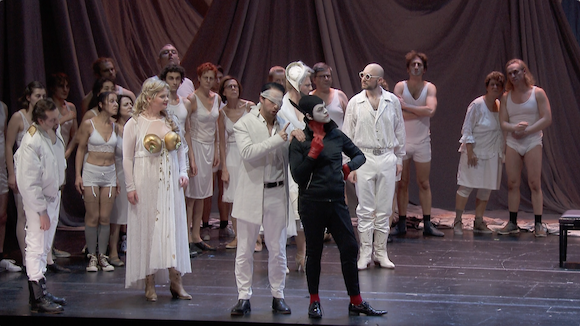 Alberich at the piano transforms the set to Nibelheim and the refugees to Nibelungs.  He’s playing from a score of the piece.  This is an mage that will recur.  We are watching a “play” in which the crowd are both participants but also observers of the “play” that is going. on with the principal characters.  The Tarnhelm briefly becomes a German military helmet and Alberich and the Nibelungs are transformed in to marching German soldiers in clown make up.  It’s fleeting though and the Tarnhelm transforms to something like a metal bowler hat for the rest of the scene where Loge and Wotan trick Alberich into giving up the Ring (and the finger with it). 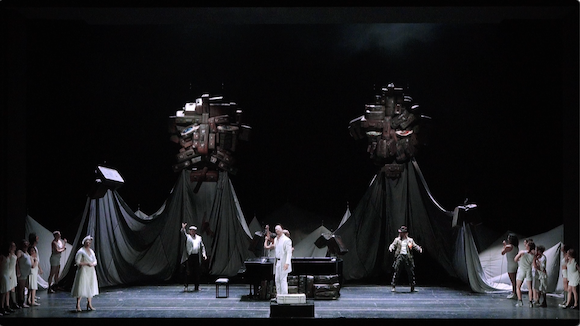 The final scene has some interesting details.  Loge is involved in everything and is obviously amused by Donner and Froh’s macho posturing.  At times he seems like the chief character.  Freia’s ransom includes sacred objects from many religions.  There’s obviously a strong attraction between Freia and Fasolt.  The crowd of refugess reappeasr at the end with loge and the Rhinemaidens.   Valhalla transforms itself by turns into Yggdrasil and then a womb with twins.  We are on our way to Die Walküre.

So there we have it dramaturgically.  I think most of the elements mentioned in my introductory post are already in play.  So far Herheim’s production is dense, tight, visually interesting and really very coherent.

What of the performances?  Thomas Blondelle as Loge is stunning.  It’s proper singing, not Sprechstimme, and he constantly surprises in the acting department.  He gets by far the loudest ovation during the curtain calls.  Derek Welton’s Wotan and Markus Brück’s Alberich are well matched.  We have a pair of bass-baritones who sing properly without any distortion for effect and act convincingly.  There’s no vocal coarseness from Brück and he does the clown part very well.  The giants; Andrew Harris and Tobias Kehrer are suitably solid.  Ya-Chung Huang is a convincing Mime. There’s pleasing singing and appropriately (and quite funny) macho posturing from Froh (Attilio Glaser) and Donner (Joel Allison – yes that Joel Allison).  Flurina Stucki as Freia and Annika Schlicht as Fricka do what the production asks of them.  There’s a rather chilling cameo from Judit Kutasi as Erda.  The Rhinemaidens (Valeriia Savinskaia, Arianna Manganello and Karis Tucker)  are excellent.  They sing beautifully and act well as a team.  They also manage to look good in rather unflattering underwear.  Sir Donald Runnicles gets a proper Wagnerian sound from the experienced house orchestra.  there’a dark, burnished quality to the brass and a nice mix of power and delicacy overall.

Gōtz Filenius’ camera work is excellent.  Even the busy crowd scenes don’t give the sense that one is missing something vital and he copes well with the difficult lighting in Nibelheim.  The picture and sound (the usual DTS-HD Master Audio and 24 bit PCM stereo) on Blu-ray are excellent.  The booklet includes a Rheingold specific interview with Herheim (the more general stuff forma a bonus track on the Götterdämmerung disk), a track listing and a synopsis.  Subtitle options are German, English, French, Italian, Japanese and Korean. 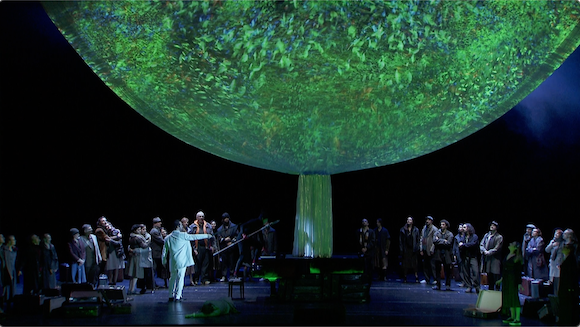 All in all an impressive and promising start to the cycle.

This is the second of six pieces on the new Stefan Herheim production of Wagner’s Der Ring des Nibelungen at the Deutsche Oper Berlin.  The six articles are as follows: