If you have been following this saga from the beginning you have probably already concluded that Herheim’s approach is radical in some ways and very, very detail oriented.  If anything, in Götterdämmerung, it gets denser and more complex with some of the central production features used in somewhat different ways.  It’s also spectacular.  Not least because of the contributions of lighting designer Ulrich Niepel and video designer Torge Møller.  They were important contributors to the first three operas.  Here they are even more crucial.  This opera also has more going on across the full width of the stage more of the time so it’s actually much harder to film.  So let’s get into it. There is a crowd of observers on stage at the beginning but they aren’t the suitcase carrying refugees we’ve seen to date.  In fact they are quite smartly dressed (for now at least).  The Norns do their thing in a pretty abstract way.  A champagne drinking Hagen is watching.  As we switch to Brünnhilde’s rock the crowd strips to white underwear and, with some help from the lighting, becomes the flames.  Brünnhilde wakes Siegfried with a kiss.  He seems to have appropriated Brünnhilde’s war gear.

At some point the flames have disappeared but the extras reappear in the background as the heroes and Valkyries looking on.  Brünnhilde is at the piano playing wildly as Siegfried descends into the piano to begin his Rhine journey.  The suitcase set and Brünnhilde exit to be replaced by Hagen at a different piano along with Alberich who points out to him  the Gibichungs. The Gibichungs are in smart modern dress (as is Hagen) and they are drinking champagne.  Siegfried arrives via the piano.  It’s played pretty straight here though the boys do get down to their underwear for the blood brotherhood bit.  They then put on evening clothes and off they go to Brünnhilde’s rock.  The Tarnhelm has given them both “Alberich” masks so they are hard to tell apart.  Hagen, of course is left on watch (and, less obviously, Alberich is lurking in the shadows).  Hagen goes down into the audience and collects (a COVID masked) Waltraute from the front row.  While this is happening the stage transforms back to suitcases and a piano with Brünnhilde on it.

The interaction between Stemme’s Brünnhilde and Okka van der Damereau, as Waltraute, is electric.  These ladies can act.  Then Siegfried and Gunther both arrive at the rock indistinguishably masked and dressed.  Siegfried’s lines, as normally performed, at this point are divided between them.  At the end of all this Siegfried has the Ring and Gunther and Brünnhilde are on the piano under the big white sheet, indicating, as ever, bride capture.  This works brilliantly as a scene in itself but does make the following “oath breaking scene” a bit incoherent.  Finally the stage transforms again to “suitcaseless” with Alberich at the piano.  Siegfried is overcome by Alberich’s influence on the Ring and becomes unconscious. 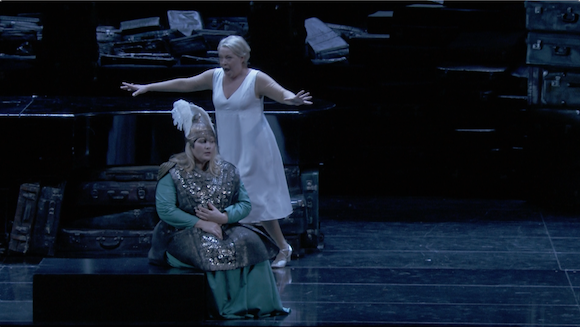 He’s still there as Act 2 opens.  Alberich can’t wrest the Ring from him though and “Schläfst du, Hagen, mein Sohn” is sung to a Hagen who is asleep in the front row of the audience. Siegfried wakes up and Gutrune arrives.  They go through an elaborate white sheet routine before exiting, presumably to do the white sheet thing.  At this point a burning man walks across the stage.  I don’t know what this is all about.  Maybe a “burning cross” to summon the Gibichungs?

Hagen whips the Gibichungs up into a bit of a phallic frenzy before Gunther appears towing Brünnhilde on the white sheet.  The whole oath breaking/denunciation scene plays out and when Brünnhilde starts her big denunciation she has a backdrop of Valhalla and its inhabitants again.  Hagen has acquired Wotan’s spear.  There are very complex evolutions of extras and the chorus.  The Valhalla crowd disappear, the Gibichungs all acquire Alberich masks.  While the various oath swearing bits between Gunther, Hagen and Brünnhilde play out it seems that Siegfried and Gutrune have been celebrating their white sheet status in the piano from which they emerge so that Gutrune can send him off on his hunting expedition. This whole scene is very detailed, very careful and very complex and ‘m sure there are important bits missing on the video.

At the start of Act 3 Gutrune is still lying on the piano but she, and it, exit to allow the Rhinemaidens to emerge from under the white sheet.  Siegfried appears in full Bayreuth rig.  At the point where the Rhinemaidens stop flirting and start threatening they transform into the Norns.   Along the way Siegfried loses his war gear and is wrapped in the white sheet by the Norns.  This is how he is dressed when Hagen and the hunting party arrive.

There’s some fantastic singing from Clay Hilley as he recounts Siegfried’s story to the Gibichungs. At some point a white sheeted Brünnhilde on a piano has made it to centre stage.  Now the violent bit starts.  Hagen stabs Siegfried with Wotan’s spear and cuts his head off with Nothung.  He tosses the head to Hagen and puts on Siegfried’s war gear.  Wotan is hovering in the background but eventually disappears.  Brünnhilde appears from the wings towing a very large white sheet with Gutrune on the other end of it and disappears off the opposite side of the stage.  Hagen stabs Gutrune and Brünnhilde appears centre stage with all the forces of Valhalla gradually appearing behind her. The piano comes on.  Siegfried’s body is placed in it and the heroes and Valkyries strip off their war gear and pile it on the body.  Brünnhilde uses Wotan’s spear to light the “pyre” and the Vallhallians (in white underwear by now) become, with the help of some brilliant lighting, the flames into which Brünnhilde disappears.  The rest of the act is a quite beautiful and spectacular display of lighting and projections until, with just a few bars to go, it all disappears leaving a bare stage with a piano and a lone cleaner sweeping up the mess.  All the world’s a stage. So to performances.  Clay Hilley is superb.  He is pretty much the perfect Siegfried; a bit of a cocky lad with a powerful, ringing tenor.  The super-tall bass Albert Pesendorfer is a solid, threatening and imposing Hagen and Jordan Shanahan continues as a really good Alberich.  The Gunther and Gutrune; Thomas Lehman and Aile Assonyi, both sing and act well and create plausible characters.  The Rhinemaiden/Norns are very good and Okka von der Dammerau is a superb Waltraute. The chorus, making it’s only appearance, is great and the orchestra and Donald Runnicles continue very strong.

Which leaves Nina Stemme’s Brünnhilde.  I need to choose my words carefully here because in many ways Stemme is superb.  Her acting is brilliant and this is a truly committed and moving performance.  There are vocal issues though.  She was getting on for sixty when this was recorded and she had been singing heavy dramatic roles for decades.  At times it shows.  The voice isn’t as beautiful as it once was nor, I think, as powerful and there’s a perceptible wobble, especially in the upper register.  It shows most when she’s singing with Hilley because the contrast is tangible.  There I’ve said it.  It’s still a fine performance by a great singing actress but it’s not the Nina Stemme of 10-15 years ago.  Sic transit gloria mundi.

This is a hugely complex staging and I’m sure, despite having written an immensely long review, that I haven’t done it full justice.  Video director Götz Filenius seems to struggle with it at times too and there are definitely gaps in what we see on video.  I really don’t see how this could have been avoided and I think he really does a very good job considering.

Technical details are almost the same as the previous operas and described in the Das Rheingold review.  The one big change is the substitution of Dolby AC3 5.1 for DTS-HD Master Audio for the surround track.  I assume this is because AC3 is more compressed and since this last disk contains the longest opera and the “extras” they may have needed the extra space.  I didn’t notice any drop n audio quality but it does make me wonder why they didn’t put the bonuses on the Das Rheingold disk.

This is the fifth of six pieces on the new Stefan Herheim production of Wagner’s Der Ring des Nibelungen at the Deutsche Oper Berlin.  The six articles are as follows: