Nikolaus Harnoncourt’s 2014 cycle of the Da Ponte operas continues with Don Giovanni.  The recording has much in common with his Le nozze di Figaro, even down to the same essay in the booklet, and I’m not going to repeat what I wrote in that review.  If you haven’t read it, I recommend a look before reading the rest of this.

The new disk also has a 52 minute documentary.  The historical/musicological points having been largely made in part 1, this one is essentially rehearsal footage but is still intensely interesting for the light it sheds on how Harnoncourt sees character being expressed through music.  There are certainly insights here that had never occurred to me. The performance is musically excellent.  Some of the performers from Nozze reappear here; notably André Schuen who comes across as a young, devil-may-care Don, incarnating Harnoncourt’s view that Don Giovanni is not really evil just rather self absorbed.  It’s worth thinking about how a contemporary audience would have thought of this character.  Also returning is Christine Schäfer as Donna Anna.  Once again her very “pure” tone is prominent and it works really well in cutting through the ensembles.  Mauro Peter is back as Don Ottavio and goes a long way to convincing me that he’s one of the very best Mozart tenors around.  “Come mai creder deggio” is sung very soflty but with exquisite beauty.  I’ll come back to this later.  Finally Marie Eriksmoen is Zerlina.  I think it suits her better than Susanna and she’s very good. 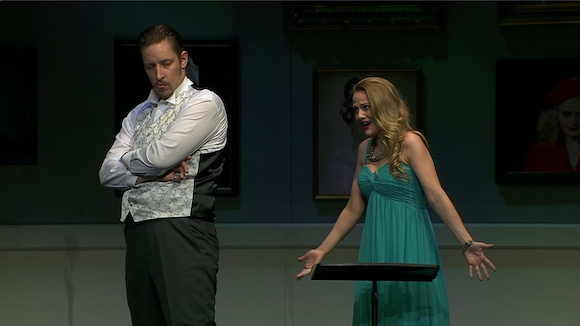 The first of the newcomers is Maite Beaumont as Donna Elvira.  She has a much fuller voice than Schäfer and occupies physical space in a different way.  She also has amazing eyes.  Even when masked they flash, quite literally.  The two Donnas make a really interesting pair here.  Then there is Ruben Drole as Leporello.  He’s shorter, stockier and darker than Schuen and is more obviously comic.  It makes another interesting contrasting pair.  There’s also a very Harnoncourt touch in the catalogue aria.  It’s very matter of fact.  None of the heavy dramatisation it sometimes gets.  Finally Mika Kares doubles up as the Commendatore and Masetto.  He has a suitably grave bass voice that he can lighten up a bit for the Masetto scenes.

There’s not much staging of course but a couple of touches appealed to me.  When Don Giovanni and Leporello “swap clothes” they exchange bow ties.  Don Giovanni ties his neatly while Leporello’s is a big mess. There’s interesting use of what looks like UV light in the night scene in Act 2.  Then for the final scene between Don Giovanni and the Commendatore, on the film, the Commendatore is seen superposed as a giant head over the action.  I’m not sure though what actually happened here in the theatre (see comment at the end).  It’s all very watchable for a semi staged performance and the music making is first rate. One aspect of Harnoncourt’s Mozart that really came over to me here was his unique approach to tailoring singing style to the character and the drama.  Part, but only part, of this is his conversational approach to recits.  At other times, for example, he has singers sing far more softly than we are used to.  He also changes phrasing in a way that I think would be hard to sing full bore.  Harnoncourt’s Mozart certainly never sounds like Verdi or Puccini.  It occurred to me that this approach likely wouldn’t work in a 3000 seat house but here Harnoncourt has the appropriately scaled Theater an der Wien as, of course, did Mozart.

Final, and largely irrelevant, note.  There’s a closer connection between Harnoncourt and Mozart than I realised.  Johann Nikolaus Graf de la Fontaine und d’Harnoncourt-Unverzagt (one can see why he used simple Nikolaus Harnoncourt professionally!) was actually a great-great grandson of Leopold II, for whose coronation La clemenza di Tito was written, and therefore a great-great-grandnephew of Joseph II who had so much influence on Mozart’s career. The third instalment; Così fan tutte, is due to be released next month.