Watching the recently released recording of the 2017 production of Giodarno’s Andrea Chénier from La Scala had me wondering why this piece isn’t done more often.  If it had been written by Puccini, and it might well have been, it would get done as often as Tosca, with which it has many similarities.  In the conscience stricken revolutionary Gérard it has one of the few multi-dimensional characters in verismo opera and the music, for Chénier in particular, has all the qualities that people listen to Puccini for.  I guess perhaps one needs at least a rough understanding of the events of the French revolution to really follow the plot as Giodarno, unlike Puccini, roots his work in actual history but still.  Opera fashion is very odd.(*)

The La Scala production is by stage and film director Mario Martone.  That’s a bit odd as it often feels like one of those productions where the director has designed a visual setting and then forgotten to actually direct the singers.  That may still be more common in Italy than, say, Germany I suppose.  The whole thing is essentially “realistic”.  It’s a clear French revolutionary setting and the story plays out exactly as per the libretto.  The one piece of visual interest is a large distorting mirror across the lower half of the stage.  It may be a half mirror in fact as I think at times there was action behind it but that’s really hard to see on the film.  It’s also pretty dark with an attempt, I think, at times to simulate candle light. 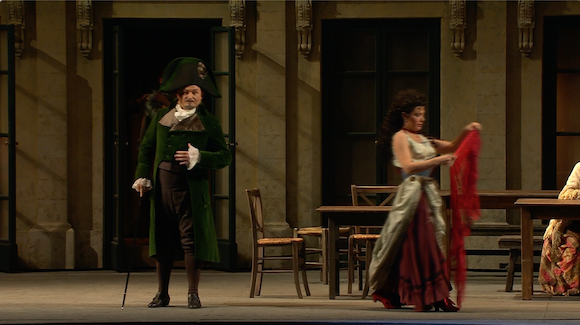 Absent clear direction (or maybe despite it) the acting is patchy.  Luca Salsi as Gérard is very good, Yusif Eyvazov as Chénier mostly just doesn’t act a lot.  There’s a lot of stand and deliver but it works pretty well.  Anna Netrebko as Maddalena is a bit all over the place.  At times she’s fine but there’s a lot of stock diva c.1950 that I find pretty hard to take.  There’s some serious overacting by some of the minor characters too.  Francesco Verna’s (Mathieu) “Dumouriez traditore” at the beginning of Act 3 is actually rather bizarre.

The singing though is terrific.  Eyvazov has everything one wishes for in a verismo tenor.  I just wish that on disc one could truly capture the frisson of high notes heard live.  Salsi is good too and his big moment; “Nemico della patria” comes off well.  Netrebko is in good voice too.  She nails “La mamma morta” and the final duet with Eyvazov is truly thrilling.  The other parts are all handled competently with Annalisa Stroppa particularly fine as Bersi.  The chorus is fully engaged and in fine voice and Riccardo Chailly gets a red in tooth and claw performance from all involved.  He’s quite the equal of Pappano on the rival recording in that respect. I don’t think this is an easy production to film.  Mirrors are always tricky and the light levels are often low.  Patrizia Carmina’s effort is a bit odd.  It’s mostly pretty conventional but occasionally she goes for shots from directly above the stage.  I’m not convinced this adds anything.  There are few other odd effects too.  The picture quality on Blu-ray is pretty good and the DTS-HD surround sound conveys the grandeur of the music well.  The stereo track is markedly less solid.  There are no extras but the booklet has a decent essay along with a synopsis and track listing.  Subtitle options are Italian, English, French, German, Korean and Japanese.

So, neither production nor video direction here are entirely to my taste but the music making is very fine.  The strengths and weaknesses are really pretty similar to the McVicar production recorded a couple of years earlier at Covent Garden and there’s really not much to choose between them.

(*)Thoughts on why Andrea Chénier isn’t performed more often largely prompted by a recent comment by Linda Hutcheon that nobody would perform Entführing if it wasn’t. by Mozart.