Der Messias is the German version of Handel’s Messiah as arranged by Mozart.  The translation dates from 1775 and is by Klopstock and Ebeling drawing heavily on the Lutheran Bible.  My German isn’t good enough to say how “archaic” it sounds to a modern German speaker but it certainly seems to be quite singable.  In any event it was presented in Salzburg during this year’s Mozartwoche in a staged version by Robert Wilson.  The arrangement adds a substantial wind section and changes the voice parts in places.  For example Doch wer mag entraten (But who may abide) is given to the bass rather than one of the high voices. It’s become quite common to present Handel oratorios as stage works but Messiah perhaps presents the most problems, and maybe, opportunities as it’s the one that doesn’t have a linear narrative.  In that respect it’s perhaps a really good candidate for Wilson’s abstract, rather austere aesthetic.  (It occurs to me that it might be interesting to see a version by Romeo Castellucci).

There’s quite a lot to unpack in Wilson’s staging.  It’s all done in a kind of blue-grey cube outlined by light and bars of light periodically come and go on the floor and walls.  Sometimes there are projections on the back wall.  Sometimes objects; logs, trees, etc descend from the fly loft.  The characters generally move slowly and in quite stylized ways.  The chorus is dressed in black and grey and has a very austere look. 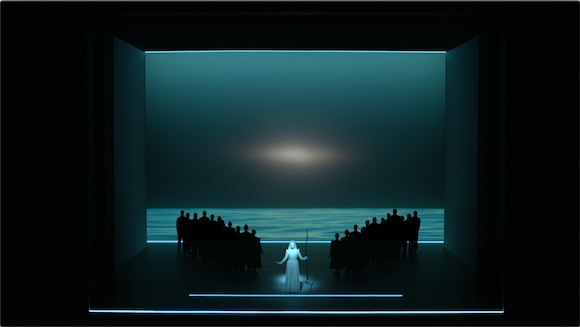 Two of the singing characters clearly have their roots in the commedia dell’arte.  The tenor (Richard Croft) is a kind of clown with a touch of Charlie Chaplin and a lot of winking and gurning.  The alto (Wiebke Lehmkul) is more restrained.  Perhaps an Inamorata?  The bass (José Coca Loza) has a sort of Japanese look and the soprano (Elena Tsallagova) looks like an early medieval plaster saint.  There are also three non-singing characters who are used quite sparingly.  There’s an old man and a young girl.  The symbolism there is clear enough.  And there’s a male dancer.  Sometimes he appears in fairly conventional dance wear, on occasions as a haystack and once, during Halleluja!, as an astronaut. Overall the aesthetic is sort of commedia meets Miyazaki in an utterly Wilsonian way.

There are scenes and little things that are weird and hard to unpack.  Why, for example, is there a headless man with a cooked lobster on a lead in Er weidet seine Hirde?  Other scenes are easier to deal with.  An astronaut dancing against a backdrop of exploding mountains during Halleluja! is unexpected but the reference to Kubrik isn’t too obscure.  Tsallagova appears in a sort of Arthurian boat for Ich weiß, dass mein Erlöser lebet.  Avalon and all that.  On the other hand some touches are just fun.  Croft and Lehmkuhl dance a rather cute pas de deux during O Tod, wo ist dein Pfeil? which sort of makes sense. (By the by, so good to see Richard Croft moving so well.  He was walking with two sticks last time I saw him)

Musically, Croft sets the tone with a Tröstet Zion that is sung pianissimo and very beautifully.  The sound from the band; Les Musiciens du Louvre with Marc Minkowski, is equally delicate, very period instrument and lovely.  All the soloists are really good and the big numbers come off.  The aforementioned aria from Tsallagova and Lehmkuhl’s lovely Es war verschmähet are very moving.  There’s powerful singing from Loza in Sie schallt, die Posaun accompanied by very baroque, but largely in tune, trumpets.  The chorus is the Philharmonia Chor Wien and they are most capable which allows Minkowski to take some of the choruses really quite fast.  It’s particularly noticeable in Wie Schafe gehn’n.  All in all, this is musically very satisfying.

The video was directed by Tiziano Mancini and I think he does an excellent job.  I felt I got a real sense of what the audience in the Haus für Mozart saw.  He’s backed up by a really good picture on Blu-ray and excellent, crisp sound on both stereo and surround (DTS-HD-MA) tracks.  There are no extras on the disk but the booklet has a decent essay that contextualizes the “German Messiah” and gives some insights into Wilson’s production.  Subtitles are the now usual English, French, German, Korean and Japanese. This is the third staged Messiah I’ve seen (and the first in German).  It’s very different from either Claus Guth’s attempt to frame a narrative or Joel Ivany’s much lower budget and rather more light hearted version.  I think it works in a subtle way that creeps up on you and begins to make sense even when at a superficial level it doesn’t.  The whole is more than the sum of the parts and it does create this sense both of hope and of a cycle of life, death and rebirth.  It’s also very beautiful on several levels.  I think I’ll be watching it again.