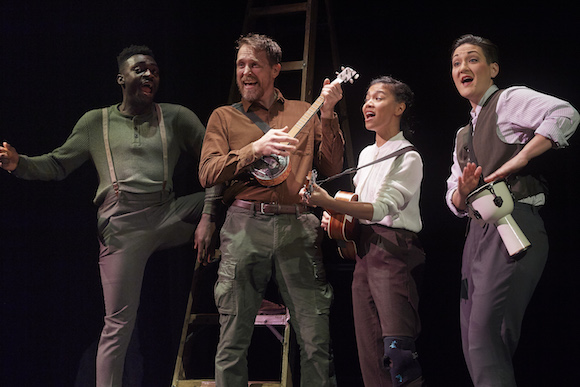 Another Brick in the Wall: the Opera is coming to Toronto after premiering at L’Opéra de Montréal last year. It will play at the Meridian Hall on November 13th–14th, 16th–17th, and 23rd.  It’s based on the era-defining 1979 rock album The Wall. It uses the original lyrics by Roger Waters and a new score by Canadian composer Julien Bilodeau. The story follows the tale of a rock star who embarks on a journey of self-discovery, finding and making timeless hits along the way. Stage direction is by Dominic Champagne.

November 19th at 7.30pm at Trinity St. Paul’s the UoT Faculty of Music are presenting Purcell’s King Arthur in a production directed by Erik Thor and conducted by Christopher Bagan.  The 20th – 23rd at 8pm sees TAP:EX Augmented Opera from Tapestry at the Sidewalk Labs (Queen’s Quay and Parliament). Conceived by Tapestry Opera’s Artistic Director Michael Hidetoshi Mori, composer Benton Roark, and co-director Debi Wong, the show explores the ways we experience memories: how they are sometimes completely sensory, how specific ones haunt us, and how they change over lifetimes.

The 21st is also opening night for Toronto City Opera’s production of Offenbach’s Tales of Hoffmann at the Al Green Theatre.  It’s on at 7.30pm on the 21st, 3,30pm on the 23rd and 3pm on the 24th.  Jessica Derventzis directs with a musical team of Jennifer Tung and Ivan Jovanovic.  Nicole Dubinsky is singing the heroine in all three acts; a notable feat of versatility.

The 24th at 2pm Adrianne Pieczonka is singing in the Mazzoleni Songmasters series in Mazzoleni Hall at 2pm.  The 25th is the annual Krehm memorial concert in aid of the ICU at St. Mike’s.  It’s at Christchurch Deer Park at 7.30pm.  The programme includes Bruch’s Kol Nidrei, Strauss’ Four Last Songs and Shostakovich’s Fifth Symphony.  Entrance is PWYC by donation to St. Mikes ICU.  I’ve been going to these since they began and the music making is always outstanding and it’s a good cause.

On the 26th and 27th Marion Newman is appearing in the Confluence Series with a show An Evening with Marion Newman. My favourite Kwagiulth and Stó:lo First Nations, English, Irish and Scottish mezzo-soprano curates a special program asking the question, “What is classical Indigenous music?”  Pre show is at 7.15pm.  The show’s at 8pm and there’s a post show talk back.

And finally, on the 28th tenor Marcel d’Entremont with Dakota Scott-Digout on piano are featured in the free noon hour series in the RBA in a programme that includes Schubert and Copland.