I’m never quite sure what I really think about an operetta like Lehár’s Das Land des Lächelns.  I quite like the music, even if it can be a bit cheesey but I’m put off by the casual cultural appropriation (though it’s not nearly as bad as Puccini!).  I’m not sure what the best directorial approach is either.  Does one play it for froth?  Does one try and mine some deeper meaning?  Interestingly Andreas Homoki’s approach for his Zürich production filmed in 2017 is to play it straight and let whatever is there appear or not.  It works rather well.  It;s a typically lavish Zürich production with lots of colour and movement and he creates some spectacular visual effects.  But he also allows for a sinister element to appear in the Chinese scenes.  It may be over-interpreting but I think one can see shades of proto-Fascism here.  It’s reinforced by the score that really has some rather sinister elements that I hadn’t noticed before.  I think there’s even a nod to Siegfried’s Funeral March.  All in all, quite interesting without being wildly unconventional. 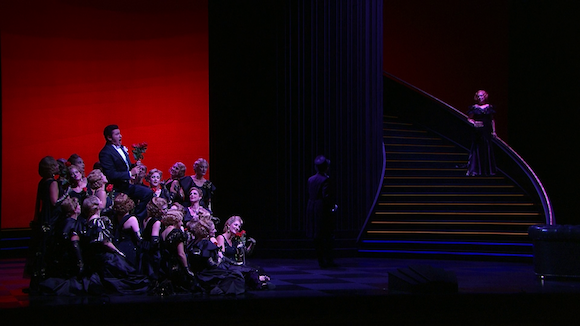 There’s a real sense in which this work is a a show vehicle for whoever is singing Sou-Chong and Lisa.  Here it’s Piotr Beczala and Julia Kleiter.  The former is near perfect.  The big numbers are tossed off with ease and splendid high notes.  He’s also pretty convincing as an actor.  Kleiter sounds pretty decent; sometimes better than that though I find a touch of harshness in her upper register.  The duets are gorgeous.  She too can act.  There’s excellent support from the very photogenic and sweet sounding Rebeca Olvera as Mi and Spencer Lang as Gustav.  The latter looks like he’s stepped straight out of a comedy by Wilde or Coward.  The chorus is excellent and provides some serious eye candy as well as movement and fine singing.  There’s also lovely playing from the Zürich orchestra sensitively conducted by Fabio Luisi who seems to balance the light and the dark in the score rather well.

Video direction is by MichaelBeyer and is very decent; supported by top notch sound (DTS-HD-MA) and picture quality on Blu-ray.  There are no extras on the disk but the quite lavish booklet has a rather good essay about the issues involved in staging operetta and how approaches, especially in the German speaking lands, have evolved over time.  There’s also a track listing but no synopsis.  Subtitle options are English, French, German, Japanese and Korean.

This is the only Blu-ray recording of this work in the catalogue to date and it’s DVD competitors are a bit long in the tooth.  I think it can be recommended to anyone with an interest in this work in particular or operetta in general.