Claus Guth’s Salzburg da Ponte cycle is certainly my favourite trifecta and they are right up on my list for top picks for all three operas so I was intrigued to see what he would do with the much less recorded La clemenza di Tito which he directed at Glyndebourne in 2017.  Bottom line, I’m not at all convinced by it.

His concept is to that the work represents a conflict between Nature and the world of artifice, power and politics.  To this end the set is split into two levels; a sort of park/garden on the lower level and an interior; Tito’s palace I guess, on an upper level.  Characters pass back and forth between the two via flights of stairs.  The other idea is to portray Tito and Sesto as childhood best friends.  This is conveyed by video during the overture and at various points during the action.  The videos are pretty effective in what is often otherwise a rather static production.  The snag though is that Richard Croft’s Tito looks a good thirty years older than Anna Stéphany’s Sesto.

There are other odd characterisations too.  It’s very hard to see what Sesto sees in Alice Coote’s Vitellia.  She’s not at all sexy and almost always has a cigarette on hand.  She rather reminds me of a younger version of Ena Sharples.  Clive Bayley’s Publio too is very unmilitary and curiously colourless.  The only tangible chemistry is between Servilia Joëlle Harvey) and Annio (Michèle Losier).  Bottom line, despite some effective moments (Ah perdono is nice, Berenice’s departure bristles with menace) this production failed to grip me emotionally or make me care at all for the characters.

The singing is a bit mixed too.  Croft is brilliant.  There’s real drama and pathos and considerable technical skill on show.  Stéphany is an adequate Sesto but not a great one.  Coote manages the Act 2 aria nicely but otherwise lacks the intensity and the sense of being quite unhinged that I look for in a great Vitellia.  The kids are good though and the Glyndebourne chorus, complete with hand gestures à la Sellars, are excellent.  The playing from the OAE is fine with some really nice work from the woodwinds.  Robin Ticciati conducts effectively enough, at his best perhaps in the choruses and ensembles which do achieve some gravitas.

The package on Blu-ray is fine.  The picture looks great and the DTS-HD-MA sound is top notch.  The video director is François Roussillon and he does the production justice.  There’s a decent “making of” documentary and the booklet contains a synopsis (no track listing), an interview with Guth and a historical essay which is actually quite good, especially on the updating of Metastasio’s original libretto.  Subtitles are English, French, German, Japanese and Korean.

The 2005 Paris production by the Hermanns is the only Blu-ray competitor to this version.  I think it’s preferable in many ways.  It’s more coherent and better sung for starters.  There’s also Martin Kušej’s intriguing, if a bit weird Salzburg version but that’s only available on DVD. 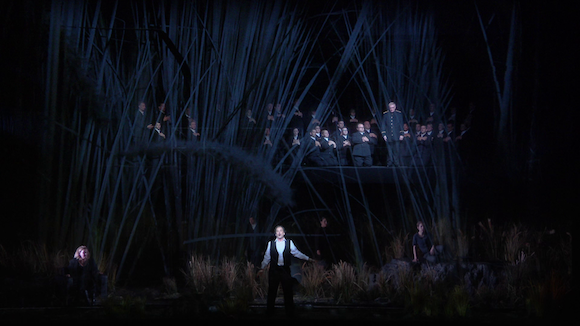