Opera 5 opened a run of Rossini’s The Barber of Seville at the Factory Theatre last night.  It’s arguably the most conventional thing Opera 5 have done.  It’s a (very) mainstream piece.  There was no accompanying themed food or drink (a glass of Rotsina?).  There was no audience participation.  There weren’t even Aria Umezawa’s characteristically minimalist touches.  What there was a carefully constructed Barber for reduced forces directed by new Artistic Director Jessica Derventzis and conducted by Evan Mitchell. 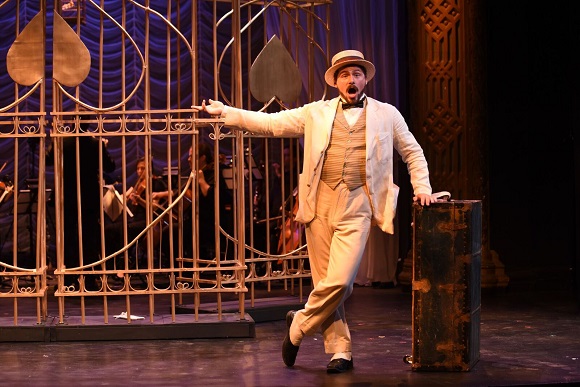 The stage is set up with the Evan and an eleven piece orchestra at the back with metal screens at the front creating a sort of “gilded cage” effect.  A few multi purpose pieces of furniture and some effective lighting complete the sets.  The piece has been gently updated to the summer of 1914 but it hardly matters as, if there is a production concept, it’s to get the maximum comedy out of the piece.  The scenes where things can be exaggerated for effect; Lindoro as vet, Bartolo showing how “good” the music of his youth was etc, are exaggerated.  There’s a lot of carefully choreographed movement, often of a rather stagey (waving hats and twirling canes) variety.  In some ways it reminded me of Dario Fo’s (in)famous production in Amsterdam, though here the debt to the commedia is less apparent.  Given that the cast is packed with people who can move and have more than decent comic timing it works.  Net result, an undemanding show that is often very funny.

It’s also an excellent singing cast.  Put aside “indie” expectations, the main roles here are all sung by people with mainstream company experience and it’s very polished.  We could start with Jonathon Kirkby’s exuberant Figaro where his constant movement sometimes distracts one from a powerful and polished singing performance.  Jeremy Ludwig matches him vocally and presents an interesting Bartolo.  At the beginning he’s obnoxious enough but he sort of seems to mellow as everything gets too much for him.  Kevin Myers’ Almaviva steers the line between romantic lead and goof pretty effectively with elegant singing where it’s needed and humour too.  His “singing lesson” scene is appropriately cringe worthy.  Stephanie Tritchew is an attractive Rosina.  She moves well and handles the intricacies of the big arias with great assurance.  Just occasionally in some of the ensembles her voice seemed a little small but it’s got a genuine mezzo timbre which I think is important in this piece.  Giles Tomkins’ Basilio kept threatening to steal the show with some classy singing and wickedly self-aware OTT acting.

There’s a small chorus which doubles up on the minor roles effectively and, as mentioned, an eleven piece orchestra.  I really like this kind of chamber reduction when the theatre/hall is of appropriate size.  The textures are clearer and the singers don’t have to work so hard to be heard.  It helps when the accompaniment is as sympathetic as Evan Mitchell’s last night, and somehow they figured out a way for the singers to follow a conductor who was behind them.  At any event, I didn’t notice any co-ordination issues.

So there you go; an effectively executed, fairly conventional Barber that makes for an enjoyable if not exactly revelatory night at the theatre.  There are two more shows; tomorrow night at 7.30pm and Sunday at 2pm.

Also tucked away in the programme is O5’s 2018/19 season announcement.  Staged chamber works by Shostakovich and Hindemith in November/December this year and Terror and Erebus; Cecilia Livingston’s new chamber opera about the Franklin expedition in May next year.