I rather like recordings from the Macerata Festival where the performances take place in the enormous amphitheatre of the Arena Sferisterio.  Bellini’s Norma is a good choice for such as setting and the 2016 production directed by Luigi di Gangi and Ugo Giacomazzi makes good use of the space.  It also uses string.  The sets are stringy.  The very scruffy Gauls wear shapeless tunics with lots of string over them.  The slightly smarter Romans also wear string.  And everybody plays with string.  There are more strings than in the Princeton Physics Department. There’s lots of face paint too.  The production also makes use of a spectacular multi-coloured lighting plot but, apart from the visuals, is pretty conventional and straightforward.

One thing one isn’t likely to get in Macerata is an A list cast though Sonia Ganassi shows up here as Adalgisa which is a touch of luxury.  Rather, one expects competent Italian singers from the regional circuit and I think that’s mostly what we have here.  Rubens Pelizzari is a rather good Pollione with genuine command of the idiom and appropriate high notes.  His acting isn’t bad either.  Nicola Ulivieri is a firm toned, virile and surprisingly young looking Oroveso.  The Norma is Maria José Siri.  Her performance is a bit of a mixed bag and she’s not Radvanovsky or Yoncheva.  At times she’s really good in both singing and acting departments.  The duet with Ganassi; Mira O Norma, is lovely and she can manage the girlishness and mood swings of Norma pretty well.  At times though she’s quite strident including, alas, in Casta diva and sometimes the acting descends into stock operatic tropes.

The chorus; an amalgam of the Coro Lirico Marchiagno “Vincento Bellini” and the Complesso di palcoscenico Banda “Salvadei”, is rather good.  Michele Gamba conducts and takes things at a pretty brisk pace but with a nice bouncy sense of rhythm.  The sound of the Fondazione Orchestra Regionale della Marche is a bit odd.  Most of the time it’s unobtrusive but sometimes the strings sound a bit thin and there were one or two moments in the winds when I was reminded of the town band in Il Gattopardo.

I really like Tiziano Mancini’s video direction.  He’s not afraid to show the scale of the arena and even to use unusual shot angles to do so.  Normally these would drive me crazy but here they seem apt.  It’s especially brave as often the lighting is quite dark and, although the detail is there on Blu-ray I don’t think it would work so well on standard DVD.  The DTS-HD MA and stereo soundtracks are both quite vivid and definitely up to the expected standard.

There are no extras on the disk.  The booklet contains a track listing and a synopsis as well as an essay on Norma.  There’s nothing to help with interpretation of this production though.  Subtitle options are English, Italian, French, German,Spanish, Korean and Japanese.

This is worth a look for the arena setting but musically it isn’t up to either the Barcelona recording with Radvanovsky or the Covent Garden one with Yoncheva.  The latter also probes the libretto much more deeply. 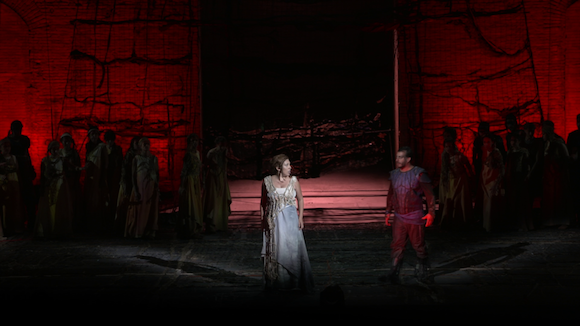 2 thoughts on “Norma with string”