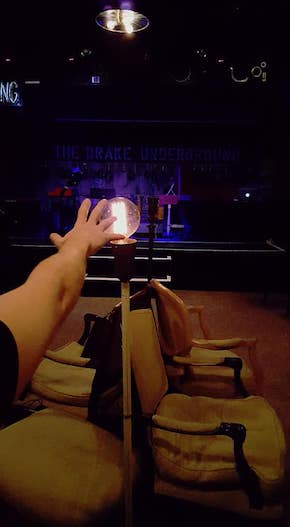 Soundstreams Electric Messiah 3 opened last night at the Drake Underground.  Some things have changed from last year.  There’s no chorus, the soloists are new, the instrumentation has changed.  There’s now a harpsichord (Christopher Bagan) and an electric organ (Jeff McLeod)  for instance.  Some things are the same.  There’s still extensive use of electric guitar (John Gzowski).  Dancer Lybido and DJ SlowPitchSound are still there, as is Adam Scime as music director and electro-acoustical wizard.  There’s still a mobile phone schtick.  It feels both familiar and quite different.

The four new soloists each bring something of themselves to the piece.  A kilted Jonathan MacArthur (getting ready for Yaksmas perhaps?) sings partly, and very beautifully, in Scots Gaelic.  Adanya Dunn brings a fresh sound and Bulgarian.  Elizabeth Shepherd  brings jazz, French and a really effective “lounge jazz” He was despised accompanying herself on organ.  Justin Welsh adds some Afro-Canadian touches.  Most of the numbers are shared between the singers; moving and singing from different parts of the small space.  This is exemplified by the opening Comfort ye, begun by Jonathan in Gaelic with singer and language and location constantly shifting.  With no chorus, there’s much more space (and it’s easier to see).  The visual and aural textures seem cleaner.  The unconventional combination of instruments and electronics works really well.  There’s enough Handel there but also much else to think about and enjoy.

The movement elements are well integrated.  It’s not just the singers.  Lybido brings his unique, almost robotic, dance style into play to good effect too.

Do I have any complaints?  Yes I do.  The final, exultant, in your face (literally if you are sitting in the front row) Hallelujah! comes far too soon.  Having seen the two previous Electric Mesiahs I wasn’t expecting a show this fresh, exciting and just plain enjoyable.  Catch it if you can.

Electric Messiah 3 plays tonight and tomorrow night at 8pm at the Drake Underground at 8pm.