The decision by Toronto Masque Theatre to pair Purcell’s miniature opera, Dido and Aeneas, with James Rolfe and André Alexis’ piece on the lovers’ inner thoughts, Aeneas and Dido, paid off last night.  It produced an evening of just the right length with two contrasting but complementary pieces working really well together. 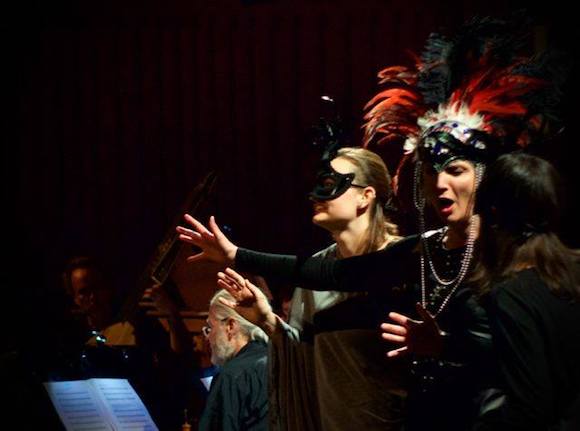 The Purcell was presented in a “minimally staged” form.  The “scenery” was a map of the Mediterranean, the costumes were largely concert wear; Andrea Ludwig’s Sorceress aside, although even her skin tight leather pants suit number would probably get an outing at a Hannigan concert.  The focus then was on the singing and acting and it was absolutely top notch.  Krisztina Szabó’s Dido was unlike any of the many, many I have seen.  Where others tend to opt for a steady flow of beautiful tone she went for dramatic effect.  Her Dido is no passive victim but a powerful, angry woman who creates her own destiny.  Her version doesn’t lack beauty though.  The big, beautiful solo arias at beginning and end were gorgeous; all the more so for being sung in a dark mezzo that contrasted beautifully with Jacquie Woodley’s bright toned Belinda.  Alex Dobson made a good Aeneas.  There’s not much personality to get into but at least Alex’ firm, grounded bass-baritone doesn’t sound wimpy. 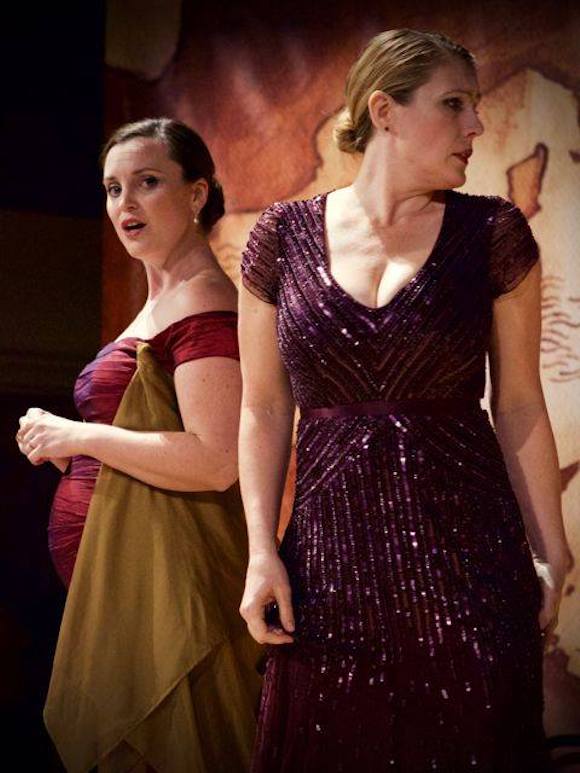 The evil trio centred on Andrea Ludwig as the Sorceress strutting her stuff mostly in among the audience with her sidekicks (Emma Hannan and Larissa Koniuk) singing from the balcony.  It worked really well.  It was camped up of course but not too much.  Once again this production proved that sometimes less is more.  The same could be said for Cory Knight’s sailor.  The nine person chorus was made up of pretty high class soloists and sounded terrific.  Last but not least, the dance element was fully present.  Choreographer Marie-Nathalie Lacoursière produced four solo dances that showed that one can riff off baroque dance elements without being twee or predictable.  The stag/Actaeon number included in the hunting scene was a surprising and welcome addition and the usual numbers were lively and inventive.  The eight piece band led by Larry Beckwith on violin provided excellent and quite brisk support throughout.  The small band and excellent diction across the board made the absence of surtitles a complete non issue.  All in all, one of the best Dido and Aeneas I have seen anywhere. 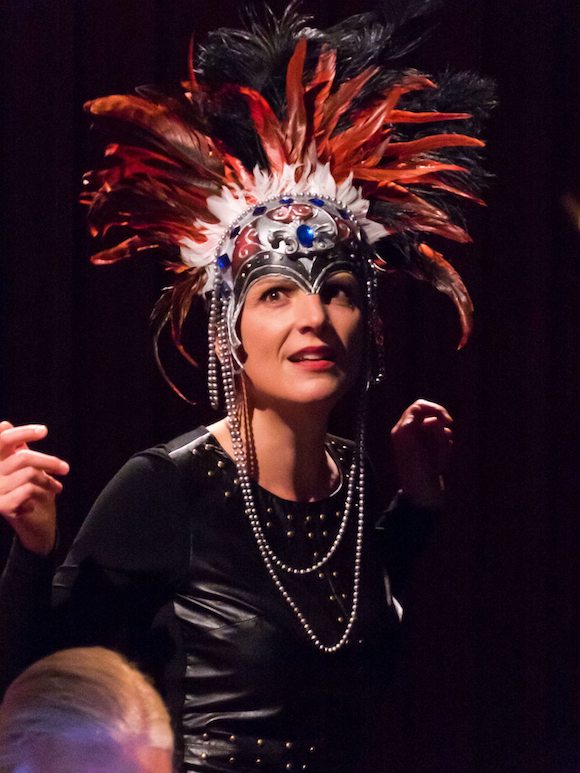 After the break it was the Rolfe/Alexis Aeneas and Dido with the same lovers, Emma Hannan as Dido’s sister Anna, Jacquie as Mercury and Andrea, this time, as a goat.  The piece mostly takes place when the lovers are alone during the storm.  Some of it deals with their feelings for each other but there’s also an extended dream sequence for Aeneas where Love and Duty compete and Aeneas is taunted by Mercury and the Goat.  It ends with Aeneas renouncing love as he looks back at the smoke cloud from Dido’s funeral pyre.  There’s quite a bit of humour and both libretto and score allude in places to the earlier piece.  I’m not sure all the humour is intentional.  At one point Aeneas asks Dido “So tell me about you…” which made me wonder for a mad moment whether we were heading into Dean Burry’s You and Meme(1).  Plenty of it is intentional though with the goat getting some very goaty lines.  It’s interesting and really doees help fill in the gaps about who these people are that rather get lost in the 55 minute rush from “Hi gorgeous” to “Get out while I kill myself” of the Purcell. 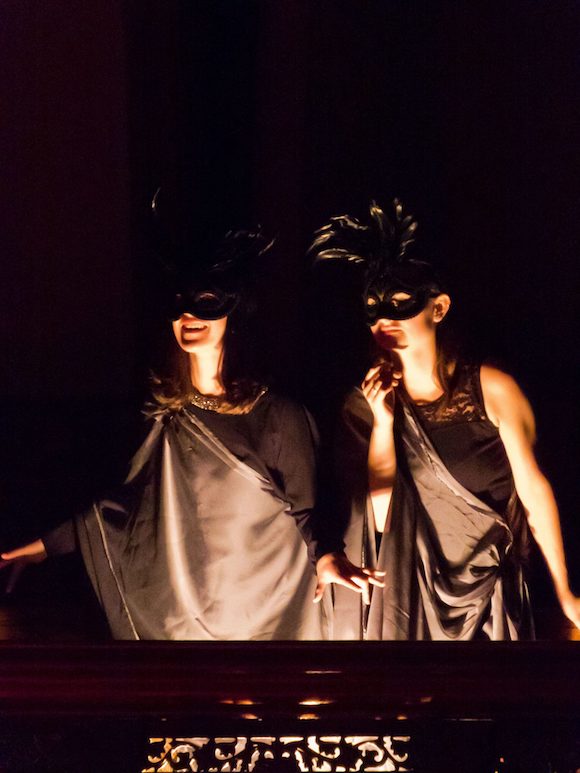 Musically it’s interesting. Scored for basically the same band as we saw earlier it doesn’t use baroque conventions (no ground bass) and the threads interweave in more complex and sometimes more dissonant ways though there are nods to Purcell’s use of chromaticism.  The music for the soloists is very singable and allows for the sort of clarity heard earlier.  This is less true for the chorus and, at times, I wished I could read the copy of the libretto provided but I don’t have laser vision.  It’s short, 33m48s on the Centrediscs recording (2), and so doesn’t outstay its welcome. 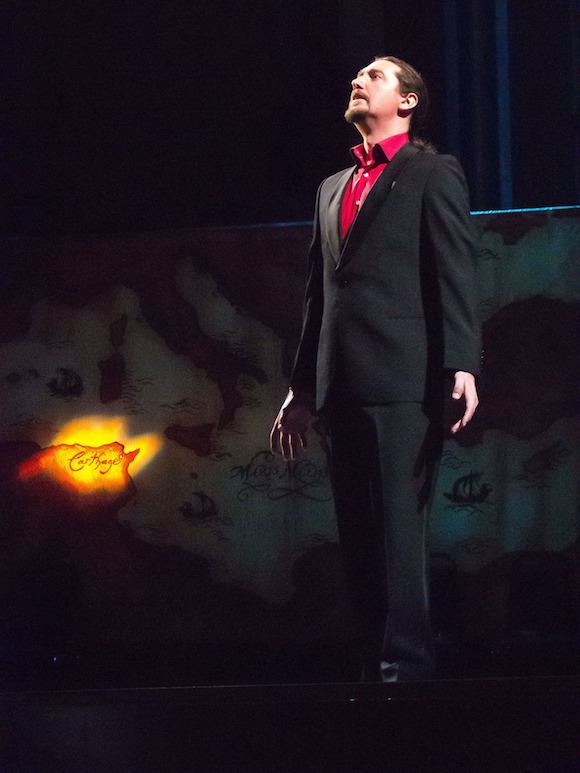 Performances were once again top notch with Alex this time able to show a somewhat wider emotional range., matched where it mattered by Krisztina.  There was, as Blackadder might say, “good fooling” from Jacquie and Andrea and Emma’s brief cameo was fine.  The chorus and orchestra again coped well though the denser textures definitely challenged the textual clarity of the choral parts. 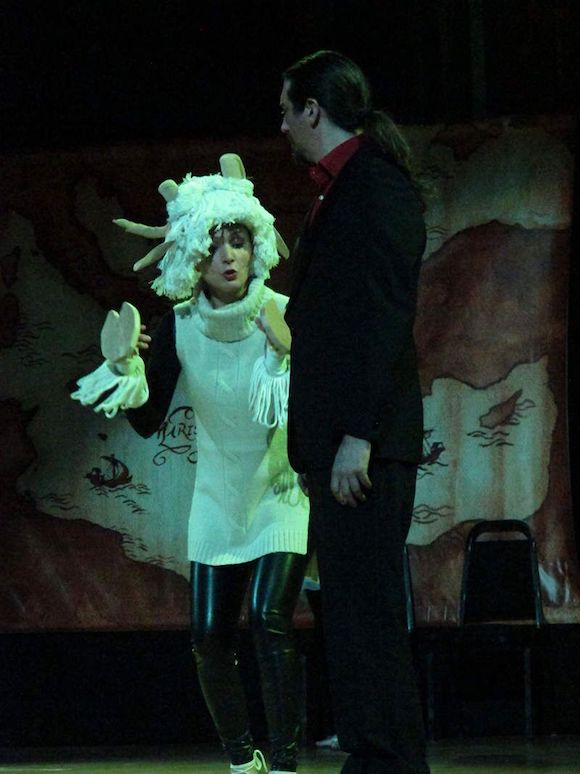 This show repeats tonight at 8pm at Trinity-St. Paul’s with a very useful intro from Larry at 7.15pm.  Highly recommended.

FN1: Krisztina hilariously partnered Keith Klassen in a performance of a piece by Dean about the “screaming goat meme” at a Tapestry Briefs concert.  It started pretty much as “So tell me about you…”

FN2: As one often does with new music I found myself thinking “I need to,listen to this a couple more times” and by happy coincidence I got home last night to find my review copy of the recording had been dropped off with the concierge.  A second opinion then will appear in due course in Opera Canada.

Photo credits: John Askko except for the goaty one which is Al Uehre.