Last night, the COC opened its 2014/15 season with Verdi’s Falstaff; a work I was not familiar with and one that turned out to be a bit of a surprise.  It’s not your usual Verdi.  It’s his last opera, composed when he was 80, and is not at all typical of his earlier work.  There are hardly any “big tunes” or even conventional arias.  The odd chorus harks back to an earlier style but much of the music is quite dark; heavy use in places of the lower pitched instruments, especially for a “comedy”.  Don’t take that as a criticism though.  It’s a musically and dramatically tight, even compact, work that is both incredibly funny and also something more disturbing.  Perhaps it’s as much about mortality as love. 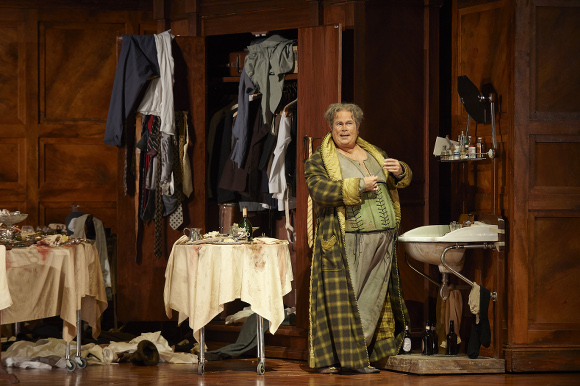 One senses that director Robert Carsen gets this and brings out both aspects on the Four Seasons Centre stage.  He has chosen to set the piece in the 1950s rather than the 1410s and it’s none the worse for that.  Settings range from a various rooms at the Garter Inn to a splendidly 1950s kitchen in Ford’s house to a rather wonderful Windsor Great Forest where the skills of lighting designer and long time collaborator Peter van Praet really shine.  There are many allusions to huntin’, shootin’ and fishin’ as Carsen evokes a declining aristocracy confronted with an increasingly confident bourgeoisie.  Ford’s disguise as Fountain could have come straight out of as movie about the black market.  It’s clever and handsome to look at; the ladies dressed to the nines in fashions of the period, lots of wood panelling and a generally bright palette.  There are also the characteristic Carsen touches though one has to wait for Act 3 before any brooms or lines of chairs appear!  As ever Carsen moves the chorus skilfully to create a range of comic and not so comic effects.  All in all, it’s a very good production that probably needs to be seen more than once to be fully appreciated but isn’t puzzling at first blush. 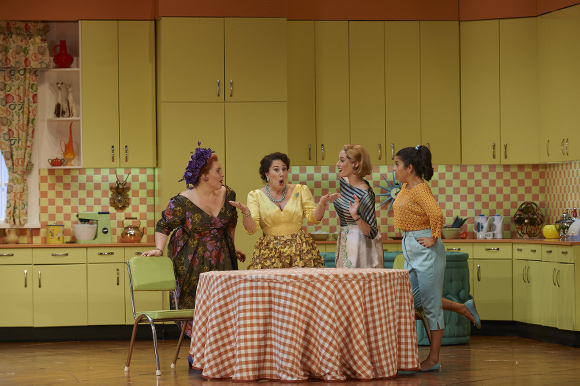 The cast is headed up by Gerry Finley in the title role in his first opera appearance in Toronto for twenty years.  He dominates the show from the start.  He’s wearing an enormous “fat suit” and facial prosthetics but they don’t seem to effect his ability to push out beautiful, rich toned, singing while engaging in some serious physical antics.  It’s a very fine performance.  He’s well supported by the rest of an all Canadian cast.  Marie-Nicole Lemieux’s rich contralto and neat comic timing made her, as Mistress Quickly, the stand out among the ladies who also included an elegant looking and sounding Lyne Fortin as Alice Ford and a more than competent Lauren Segal as Meg Page.  The young lovers were played by Frédéric Antoun as Fenton and Simone Osborne as Nanetta.  Antoun produced some really fine singing throughout.  He has a lovely voice.  Simone was her usual engaging stage self throughout and shone vocally in Act 3 where her clear bright soprano nailed the one real set piece aria of the night.  Russell Braun, as Ford, gave the best Verdi performance I have seen from him.  The role fits and plays well to his acting skills.  It’s no mean feat to be playing second baritone to Finley and not sounding thin by comparison.  He wasn’t.  Robert Gleadow and Colin Ainsworth made a very good comic duo as Pistola and Bardolfo and Michael Colvin made a decent fist of the rather thankless role of Dr. Caius; Nanetta’s elderly suitor.  The chorus and orchestra were their usual excellent selves with Johannes Debus conducting.  I suspect his reading steered darker in both mood and colour than some others would have gone.  It’s an admirable Debus characteristic that he will find the sound world he wants for a production and coax it out of the orchestra.

All in all this is a very successful production; funny and moving by turns.  And there’s Gerry Finley.  Falstaff runs at the Four Seasons Centre with six more performances between now and November 1st though the last two are already sold out. 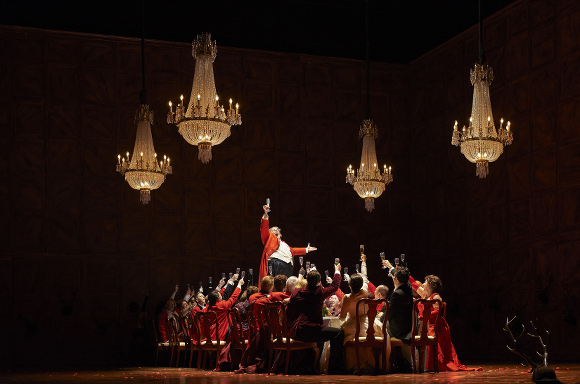 5 thoughts on “The Revengers’ Comedy”