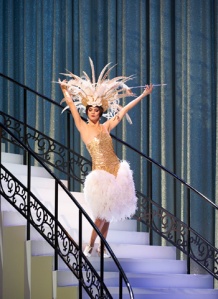 In an age of co-productions many opera productions are seen in multiple houses.  Some of them we get to see in multiple guises.  For example I’ve seen Tcherniakov’s Don Giovanni on DVD and will be seeing it live later this season in Toronto.  Spmething that’s been fermenting in my brain for a while now is why the same production can get a drastically different reception in different places.  The piece that first made me think about this was Chris Alden’s Die Fledermaus.  This was generally well received in Toronto (more perhaps by my friends and acquaintances than the print media but that’s par for the course) but universally panned in London when it played at ENO.  Bryan’s interesting comments about the Carsen Falstaff kicked off the train of thought again and made me want to put some tentative thoughts into writing.

To recap on Fledermaus, Alden’s concept was quite a dark one moving the action through fin de siècle decadence to the rise of Fascism.  There was a heavy dose of Freudianism.  In Toronto, Michael Schade created a deeply neurotic Eisenstein (if you have seen his Tito you can imagine it).  Ambur Braid’s Adele too was not your standard airhead but had the same disturbing quality she brought to Vitellia.  Above all, Johannes Debus conjured a sound from the orchestra that was almost more Berg than Strauss.  This is hard to describe but it was palpable.  In other words, key members of the cast, the conductor and the orchestra were totally in synch with the production concept.  Is that perhaps the key?  In London, of course, the work was given in English which may not have helped (few comments I read had much good to say about the translation) but I think there must have been more than that going on.  People who saw the ENO show please comment.

For Falstaff, something similar happened.  It’s not as radical a departure from tradition as Alden’s Fledermaus but it does have some interesting things going on.  Particularly, I thought, a sense of ageing and mortality.  And again Debus conducted and often produced a very dark sound from the orchestra.  I may be wrong here as this is not a score I know well (and this time I didn’t see him rehearse the orchestra) but was he, perhaps, once again reinforcing the director’s vision?  The Met production had Maestri, playing his 200th Falstaff, in the lead role and Levine (not the world’s most director sensitive conductor) conducting his umpteenth performance of the work.  Toronto had Finley and Debus both coming to the work for the first time.  How much Carsen did New York get one wonders?  I’ve seen this before in weaker productions where a role veteran just does his/her thing because they don’t really buy into the director’s ideas.  That was my impression when I saw Michael Schade as Tamino at COC.  It felt like his 200th performance; the only time he’s ever made me feel that way!  I’ve not seen many singers who can completely recreate a role for each new production; the big exception being Natalie Dessay who is wonderful at it.

I’m also wondering if it makes a big difference how deep tradition is in a house and how busy the season is.  It’s obviously easier to mould orchestra and chorus to a production vision if they haven’t performed the work a gazillion times and if they don’t have five or six other shows to worry about simultaneously.  One certainly hears stories from New York, Vienna, La Scala etc of conductors being told essentially “very interesting but this is how we play it”.  One can’t really imagine that happening in Toronto.

So, where does that leave us?  I think we would all easily agree that for a production to really succeed everyone involved has to be committed to making that particular production succeed.  That requires a certain artistic and intellectual flexibility (and maybe humility) from everyone involved.  That may be easier to achieve with people new to the work.  It may also be easier to achieve in a less busy house.  Thoughts?

10 thoughts on “Why productions succeed in one place but not another?”