Directors seem to see the 1950s as the logical time period to stage Verdi’s Falstaff though they come up with very different 1950s.  Robert Carsen set his in a rather dark world that pits the nouveau riche against a declining gentry.  Richard Jones went for a sort of Carry on film aesthetic that was entirely English.  Laurent Pelly in his production filmed at the Teatro Real in Rome in 2019, despite some overtly English elements in the set design,  gives us a distinctly continental European feel.  Indeed Falstaff, Pistola and Bardolfo might easily be hangovers from the more criminal end of the French resistance.  There’s much less of “class struggle” in Pelly’s rather straightforward production.  In fact it seems like a fairly light comedy with the darker aspects emerging only rarely.

It has some attractive features.  The final scene is very effectively staged using mirrors to create an unworldly effect.  He gets a genuinely funny “yes you can, no you can’t” vibe going in the various antics of Nanetta (Ruth Iniesta) and Fenton (Joel Prieto).  Yet, despite some good performances, I really wasn’t really drawn in.  It’s the sort of production that you wouldn’t feel cheated by if you saw it live but you would mark it down as just another decent night at the opera rather than an exciting one. 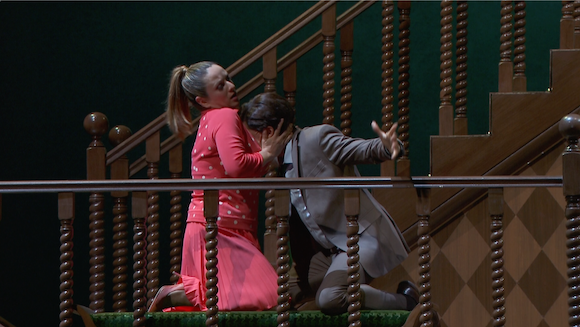 This is despite a strong performance from Roberto di Candia in the title role and an excellent Mistress Quickly in Daniela Barcellona.  The rest of the cast is very decent but, Iniesta aside, not especially memorable.  The conducting of Daniele Rustoni also earns the “serviceable” label.  The orchestra sounds pretty good but there’s far less “snap” in the ensembles than Jurowski managed at Glyndebourne and the sound world is closer to typical Verdi than the more sinister ambiance that Debus drew from the COC orchestra. 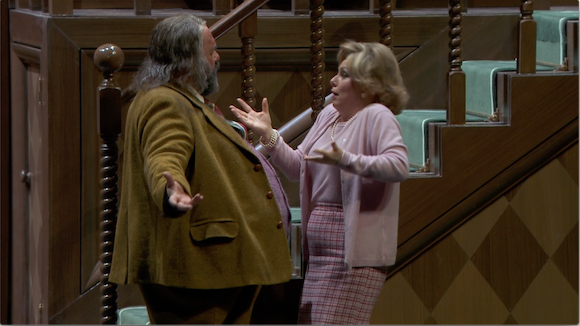 Video direction is by Stéphan Lebard and it’s fine.  Most of the staging is pretty intimate so it films easily.  Where there is a bigger picture; the hunt for Falstaff, the final scene, he shows us what’s going on quite effectively.  In fact he makes a very good fist of the last scene which is “big”, dark and includes mirrors so about as hard to film effectively as it gets.  The video quality on Blu-ray is good enough (just!) to cope with this.  The sound (DTS-HD-MA and stereo) is very good too.  The booklet includes a track listing, a synopsis and a rather odd essay by Joan Matabosch.  There’s nothing on the disk or in the booklet that provides any insight into the director’s thinking.  Subtitles are English, French, German, Spanish, Korean and Japanese.

So there it is, a perfectly serviceable Falstaff but not one for the ages.