Robert Carsen doesn’t seem disposed to treat Handel too reverentially.  Although there is some of the trademark Carsen cool minimalism in his 2011 Glyndebourne production of Rinaldo (not to mention symmetrically arranged furniture) there’s also a degree of humour, as there is in his Zürich Semele.  I find it very effective and, judging by the audience reaction, so did the people who saw it at Glyndebourne.

The basic idea here is that the story is the escapist fantasy of a bullied schoolboy.  It draws heavily on the British school story genre with obvious references to St. Trinian’s along the way.  (How much Carsen’s Upper Canada College experiences influenced matters is anyone’s guess).  The scene opens with Rinaldo being bullied for having a picture of Almirena pinned inside his desk.  Armida and Argante enter as gown and cap clad staff who find Rinaldo’s pack of cigs and beat him.  Armida is fond of using her cane.  (Rarely can so many bottoms have been smacked on the stage of a major opersa house!)  Then Rinaldo’s fantasy starts as the crusader knights enter via the blackboard and slaughter his tormentors. 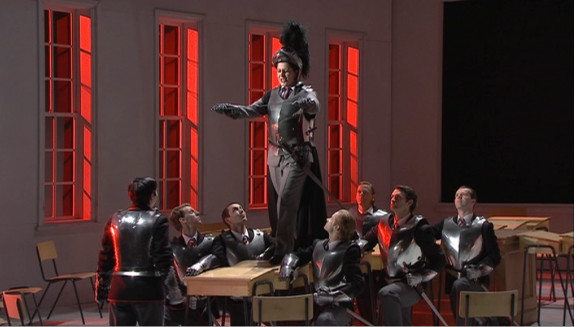 There are some excellent performances.  Brenda Rae as Armida is stunning both visually and vocally.  It’s a tough role for a soprano with a tricky, low, tessitura, especially when sung at period pitch.  She also looks amazing and could probably make a fortune in a different profession.  Sonia Prina is Rinaldo and brings both a true contralto timbre and real dramatic honesty to the role.  It’s tricky.  She has to be both the frightened schoolboy and the Christian paladin simultaneously, all the time.  She does it very well indeed.  Anett Fritsch is a sympathetic Almirena and Luca Pisaroni a less bumbling Argante than some.  There are also fine performances from countertenor Tim Mead as Eustazio and contralto Varduhi Abrahamyan as the Christian general, Goffredo.  The very committed contribution oif the gentlemen and ladies (?) of the chorus is also worthy of noteThe Orchestra of the Age of Enlightenment sound splendidly idiomatic and Ottavio Dantone directs effectively from the keyboard though some may find his tempi in the big set piece arias on the slow side. 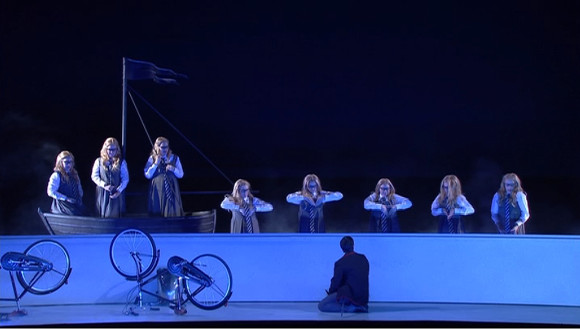 The DTS sound and picture on DVD are pretty decent but I really would like to see the Blu-ray version because both could use extra detail, not least because video director François Roussillon is prepared to give us a decent helping of long, scene setting shots.  There are very good “Director’s Notes” and “Conductor’s Notes” on the disk.  The documentation was missing from my copy so i can’t comment on that but I would say that, unless one is really familar with the piece, having a synopsis to hand is a good idea.  Subtitle options are English, French and German.

People who think Handel is boring and/or have a reasonable tolerance for reinterpretation will likely enjoy this production and it’s certainly well performed and recorded.  Hard line traditionalists would probably be better advised to stay away. 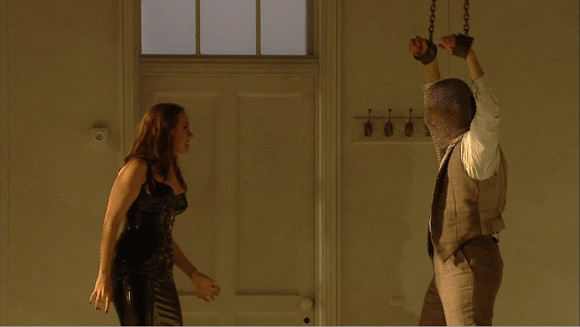 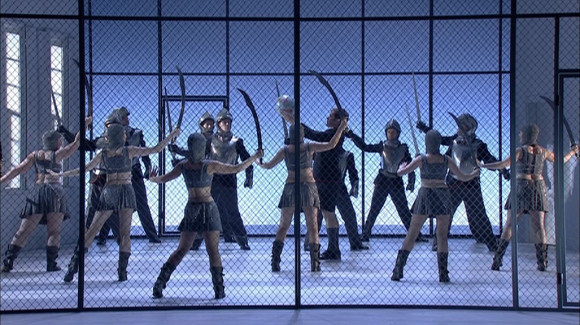