In many ways Meyerbeer’s Les Huguenots is a typical mid 19th century French grand opéra.  It takes a sweeping, epic story; in this case the St. Bartholomew’s Day Massacre, and grafts onto it the elements the paying public demanded; spectacle, ballet, showpiece arias etc.  The result is unwieldy and, when applied to such grim subject matter, almost grotesque.  The 1991 Deutsche Oper production by John Dew (performed in German as Die Hugenotten) takes these disparate elements and works with them; mixing laugh out loud and extremely grim to create a piece of music theatre that is truly disturbing. 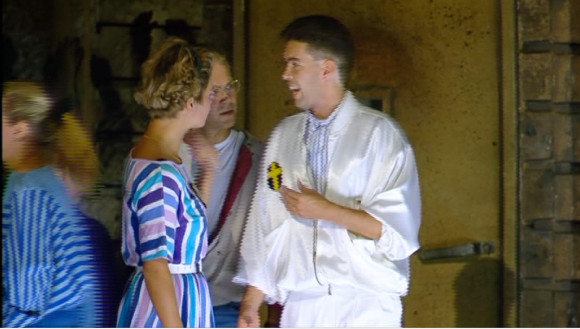 The “grim” starts before the downbeat.  There’s a silent scene of people lined up in front of an armoured door with a peephole.  They go in one by one and emerge with a badge of a yellow cross.  Soon Nevers’ catholic soldiers arrive and start laying into people with batons.  It’s the first, but not the last, place where the identification of the massacre with Nazi persecution of the Jews is alluded to.  From here we move to the scene where Nevers’ regiment welcomes Raoul de Nangis.  It’s all very jolly with campy waiters, drinking songs and scantily, if somewhat sinisterly, clad girls (there’s a hint of The Night Porter here).  The “grim” is here represented by the ultra-Calvinist  Marcel, here depicted as Raoul’s brother rather than servant; an interesting and effective touch.

Act 2 begins with Marguerite de Valois, dressed as a high concept shepherdess, singing a song about how Love and Nature will heal all divisions to her haute couture clad ladies, who might have stepped straight out of a Fellini film.  There’s a sense of irony and naivety here.  Marguerite’s girly plans are simply no match for the engrained hatreds that she seeks to bridge.  There’s a little panto like scene where Marguerite reconciles two squabbling little boys; one dressed as a priest and one as a Protestan minister.  We get more girly games with a blindfolded Raoul and the ladies around the pool but it all quickly deteriorates into hatred when Raoul, unjustly, repudiates his promised bride and peace offering, Valentine de St. Bris sparking off a near riot.

The second half opens with a tug of war between Protestants and Catholics complete with cheerleaders but it quickly gets more sinister despite the intervention of dancing gypsies.  Soon we reach perhaps the most chilling scene in all opera; the blessing of the weapons that will be used to massacre the Protestants.  Here the full force of religious hatred is fully exposed both by Meyerbeer and Dew.  From here there’s no let up as we proceed via the reconciliation of Valentine and Raoul, and the execution of the honourable, but insufficiently fanatical, Nevers to the massacre itself.  In a final nod to the Jewish parallel we see Valentine draped with a sign that roughly translates as “This swine slept with Protestants” before the murder/execution of Marcel, Raoul and Valentine.  The last vignette where St. Bris realises he has killed his own daughter only reinforces the horror.

It would be easy in the midst of all this high concept drama to lose track of the music but this production never does that.  The big set pieces are sung extremely well.  Richard Leech is a very good Raoul with ringing high notes and just the right amount of heroism without being bombastic.  Angela Denning navigates the showy part of Marguerite with very fine coloratura singing in her big second act number and just the right degree of irony elsewhere.  Fine performances too from Lenus Carlson as the swaggering Nevers who always manages to retain the sort of decent insouciance that will eventually lead to his death.  Martin Blasius navigates the tricky part of Marcel and manages to not overact it.  Lucy Peacock is a straightforward and quite appealing Valentine.  Conductor Stefan Soltesz seems in sympathy with both composer and production and points up the ironies of the score very effectively. 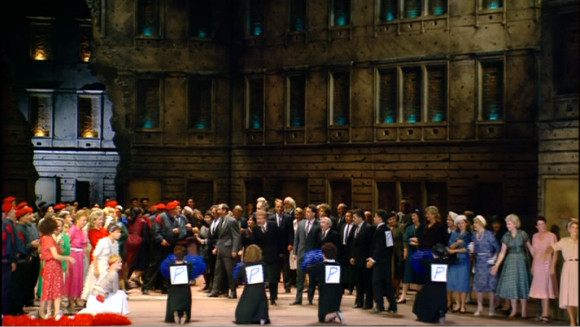 Video direction is by Brian Large and it’s reasonably OK.  The crowd scenes get a bit short changed but mostly one can figure out what’s going on.  Technically it’s 1991 quality.  The picture is more or less adequate but no more and the sound, stereo only, is typical of recordings of the period.  Nothing to get in the way of the performance but no home theatre buff is going to use this as a demonstration disk either.  There are no extras on the disk but the booklet is reasonably informative about both work and production.  Subtitle options are English, French and Spanish. 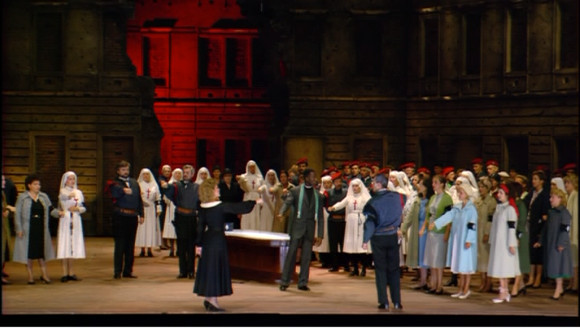 There is only one other video recording of this work in the catalogue.  It dates from the same period and features Joan Sutherland in a Lotfi Mansouri production.  The two could not be more different.  The Mansouri production could have been staged anytime from the 1950s to now in a rather conservative house.  Dew’s production looks very modern and would not be out of place in Berlin, even today.  The Berlin recording is also vastly superior technically.  Many people might be put off by the Berlin recording being in German (I was) but in fact I think I might actually prefer the German.  Hard line traditionalists will probably prefer the Sutherland version.  Others will find much to enjoy and to disturb in John Dew’s offering. 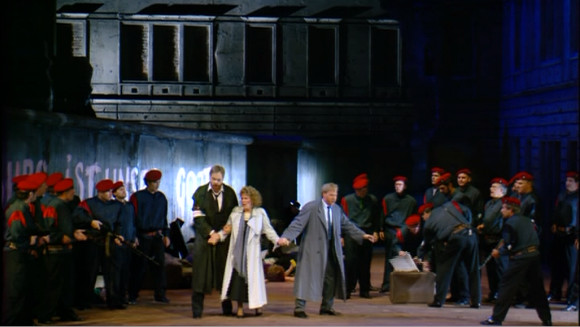