Pietro Antonio Cesti’s 1657 dramma musicale La Dori is a hoot.  It seems to prefigure every plot device that will ever be used in opera.  A baby sold by bandits who turns out to be a princess.  Pirates. A ghost. Mistaken identities.  Swapped potions. Men pretending to be women.  Women pretending to be men.  Love polygons of fiendish complexity.  I won’t even attempt to explain the plot because it’s very complex and silly and hardly matters.  It took me a half page diagram just to map the relationships between the characters.

It also has the usual seventeenth century problem of there being multiple versions and changes of voice type between runs.  Many of the roles, including possibly female ones, were likely sung by castrati so there’s also he usual problem of who to cast in those roles.  The production recorded at the Innsbruck Early Music Festival in 2019 uses a mix of female voices and countertenors for the high roles.  One odd result of all this is that there is only one female character who stays female all opera and is sung by a female singer in contrast to the character she eventually marries where a female singer plays a man who spends most of the opera disguised as a woman.  Weirdly enough it sort of makes sense dramatically and all the plot twists resolve into a double wedding happy ending with a fair bit of clowning for the plebeian characters along the way. Stefano Vizioli’s production is straightforward enough.  It looks vaguely “period” though what period is anyone’s guess.  The scenery and backdrops are simple with painted flats and much se of a scrim.  Trying to impose a concept on this thing would be mad.  It’s confusing enough as it s.  There’s a fair bit of physical comedy though for the low lifes which is sometimes fun.

Musically it’s very much of the period.  There’s more arioso material and less dry recit than in some works from this period but there’s nothing as disturbingly modern as some of Monteverdi’s works.  This is musically enjoyable but it isn’t Coronation of Poppea.  Naturally, a period band is used.  It’s the Accademia Bizantina conducted by Ottavio Dantone and they sound pretty good. 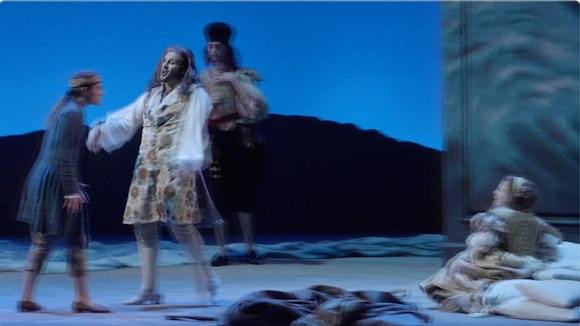 There’s some really good singing.  Francesca Ascioti in the title role has a nice, darkish mezzo which suits her fairly troubled character.  Countertenor Rupert Enticknap sings Oronte, the prince at the centre of the drama and he’s pleasing to listen to and manages to be as psychologically convincing as anyone could be in this thing.  My favourite singer was probably Hungarian soprano Emöke Baráth who sings the Egyptian prince Tolomeo who spends most of the opera disguised as Celinda; a woman.  She’s quite fiery and tends to dominate the scenes she’s in.  Francesca Lombardi Mazzulli sings Arsinoe who is supposed to marry Oronte but ends up marrying Tolomeo.  It’s a bit of a sappy role but she makes the most of it.  Frederico Sacchi is a powerful true bass who comes off very well as Oronte’s uncle and regent Artaserse.  There’s good clowning from Konstantin Derri (countertenor) as a rather fly eunuch, bass Rocco Cavaluzzi as the jester Golo and tenor Alberto Allegrezza (en travesti) as the randy old nurse Dirce.

The video, directed by Karen Katchatryan is pretty straightforward helped by very good sound (DTS-HD-MA and stereo) and picture on Blu-ray.  It’s quite dark in places so I’m not sure how the picture would read on DVD.  There are no extras but the booklet has a synopsis which also explains the extremely convoluted back story, a track listing and a pretty decent essay on the work and where it sits historically in the development of opera.  Subtitles are English, Italian, German, Japanese and Korean.

If you like, say, Cavalli you will likely enjoy this, silly as it is. 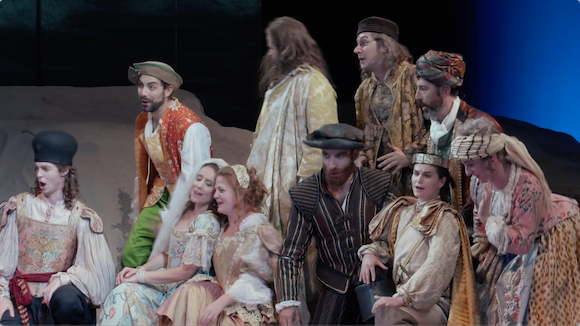