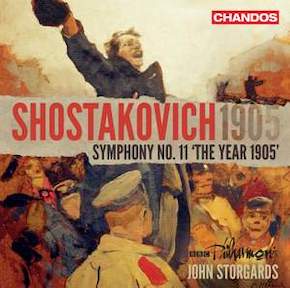 One of the “selling points” of John Storgårds’ new recording of Shostakovich’s 11th Symphony (The Year 1905) with the BBC Philharmonic is that it uses real church bells rather than orchestral tubular bells for possibly the first time since the original recording by the Leningrad Phil.  They are interesting but that’s not the main reason to buy this disk.  There are two far stronger ones.  It’s extremely well played.  Storgårds conjures up an almost unbearable amount of tension and it never really relaxes.  This is a performance that will have you on the edge of your seat throughout.  Needless to say, he’s very well backed up by the BBC’s Salford based orchestra who produce exceptionally lovely string tone and brass that is emphatic without quite the “teeth on edge” quality of some Russian orchestras.

The second reason is the recording which plays a really important part in reinforcing the effect of the performance.  It’s an SACD recorded in multi-channel sound and that goes a long way toward helping the brooding atmosphere with a tangible surround sound element, wide dynamic range and very solid bass.  There is a standard CD layer on the disk which can be played on any CD player.  It’s good but not as striking as the multi-channel DSD layer.  One has to think the studios at MediaCity in Salford where this was recorded are well fit for purpose too.

The booklet contains a good essay by David Fanning discoursing on Shostakovich’s political intentions with the work as well as delving nto the musical structure of the piece.

All in all, well worth a listen, especially if you can handle SACD.