Purcell’s King Arthur contains some wonderful music but it also poses real staging issues.  How much of the play that the music supports does one include?  How to contextualise the unfamiliar version of the King Arthur story?  How to deal with the rather crude nationalism?  Sven-Eric Bechtolf and Julian Crouch come up with a very interesting approach for their 2017 production at the Staatsoper Berlin. 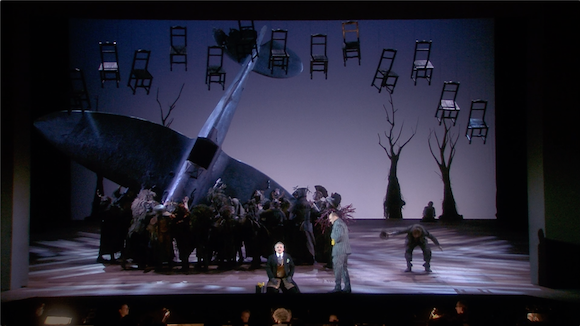 It’s a multi-layered treatment that takes quite a bit of unpacking.  Much of the basic story of the struggle between Briton Arthur and Saxon Oswald with their various wizard/druid helpers is left pretty much intact but for Dryden’s text being rendered into German.  But there’s also a framing device.  We are in the 1940s.  Young Arthur is an eight year old whose father has been killed in battle.  Emmeline is his mother and Merlin his grandfather.  Other characters double up as part of the family and its circle.  Grandfather/Merlin is reading Arthur the story of how the Britons defeated the Saxons.  So far so good but there’s more.  There’s some gentle (and not so gentle) poking of fun at the stereotypical (1940 And All That) British view of the Germans as seen by the Germans and there’s also a critique of excessive chauvinism; a BBC broadcast about “beastly Huns” is followed by a St. George’s Day celebration set in a home for crippled ex servicemen. I don’t think it’s a coincidence that this was first staged in the aftermath of the Brexit referendum.  The whole thing is quite clever and often very funny but I suspect one needs to see it more than once to completely unpack it.

Musically there are some interesting choices too.  All the usual numbers are there but there are also one or two interpolated from other works.  On top of that there’s instrumental music; mostly Purcell, some Dowland, playing as a backdrop to much of the spoken dialogue.  I think this works well and makes the piece seem a bit more integrated.

Visually the production is mostly a mash up of 1940s and Fantasy Arthurian with some visual jokes; subtle and rather crude, thrown in.  There are puppets large and small and a Spitfire (of course!).It’s kind of fun.  The sacrifice scene is particularly weird with most of the chorus dressed as haystacks. 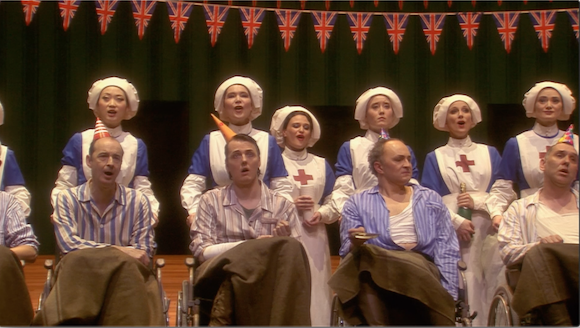 The actors are good and the singing is for the most part excellent.  Each singer, of course, covers multiple small roles with the exception of Anett Fritsch who gets to be Philidel nearly all the time but does get to sing Fairest Isle; perhaps the work’s most famous number.  The other singers are Robin Johannsen, Benno Schactner, Mark Milhofer, Johannes Weisser, Meike Droste and Hans-Michael Rehberg.  I think Johannsen is the only native English speaker but one wouldn’t know it.  All the singers have a real grasp of the idiom and splendid English diction.  The chorus is excellent too though they can’t quite pull off Mummerzet in Your hay it is mow’d.  The pit band is the Akademie für Alte Musik Berlin with René Jacobs conducting and they sound just right.

Video direction is by Andy Sommer and it gives a very fair presentation of the stage action.  He uses some very long long shots that are pushing the boundaries of being able to see the details clearly even on Blu-ray.  The picture quality is true HD and the sound is fine.  Both PCM stereo and DTS 5.1 are offered (not DTS HD).  The booklet has a very detailed track listing and a synopsis of what’s actually happening in the production which is vey helpful.  Subtitle options are English, French, German, Japanese and Korean. 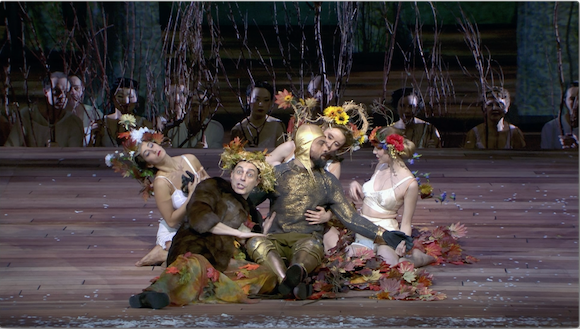 This is a very interesting disk.  It’s thinkier and less exuberant than the old Salzburg recording.  I don’t think it’s quite as much fun and there’s not really anything to match the Salzburg frost scene or Michael Schade rocking the harvest home.  On the other hand I think it has more to say and technically it’s quite superior to the Salzburg version which is definitely showing its age.