A while ago I had the misfortune to watch a thoroughly misconceived version of Purcell’s King Arthur. I have now had a chance to watch a version from the 2004 Salzburg Festival and it’s a lot better! This production by Jürgen Flimm takes Purcell and Dryden’s work and treats it respectfully but not solemnly. As originally intended, it’s given as a series of scenes spoken by actors interspersed by songs which are sung by five singers who change role as needed. The dialogue is in German but the singing is in English which seems a bit odd at first to an English speaker but one soon gets used to it. Flimm uses Dryden’s text for the most part but interpolates some scenes, notably where Merlin, disguised as an investment banker’s wife, enters via the auditorium and delivers a diatribe about Regietheater and how Salzburg has gone all to Hell. It’s just like being at a typical COC Opera 101. It’s staged in the appropriately baroque Felsenreitschule and the set mirrored the arcades of the building with a brightly painted wooden arcade structure set behind the stage. The orchestra is in a sunken pit in the middle of the stage so the action takes place all around them. There is clearly some heavy duty projection equipment behind the set because the production uses a wide range of, often spectacular, lighting effects. 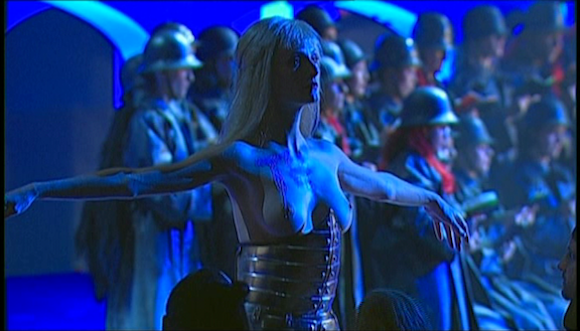 The plot is carried by the spoken bits with the music providing allegorical commentary and ornament. Arthur (Michael Maertens), king of the Christian Britons is in love with Emmeline (Sylvie Rohrer), the blind daughter of Conon (Peter Maertens), duke of Cornwall and vassal of Arthur. Arthur is at war with Oswald (Dietmar König), the pagan king of the Saxons, who is also in love with Emmeline. Arthur is assisted by the monk Aurelius (Christoph Kahl) and the wizard Merlin (Christoph Bantzer), as well as the slightly confused spirit Philidel (Alexandra Henkel) and Emmeline’s maid Matilda (Ulli Maier). In the Saxon corner are the magician/priest Osmond (Roland Renner) and the demon Grimbald (Werner Wölbern). The Brits are dressed in vaguely British military uniform, or, on occasion, civvies c. 1930 while the Saxons have a cross between c. WW1 Teutonic and the Schenk Ring.

We start out with the preparations by each side for the battle between the two sides. The sacrifices to Thor, Freya and Wotan are scantily clad and obviously stoned “babes”. Merlin floats in from the Gods on a sail board. Oswald chews a lot of scenery. Emmeline and Arthur make out. Of course that’s all quite innocent because she “sees” with her hands! All sorts of stuff which doesn’t get captured well on the DVD goes on in the background. After the battle the “bad” spirits try to lead the Britons astray while the good ones, including a charming Philodel, try to keep them on track. In the ensuing confusion Oswald kidnaps Emmeline and Matilda.  Emmeline gets her sight back via a magic potion from Merlin which cues a very funny scene with a video camera.  The frost scene features penguins transforming to beach babes and there’s a boxing match, refereed by Michael Schade, where Arthur wins his final victory over Oswald.  Cue celebrations and finale. 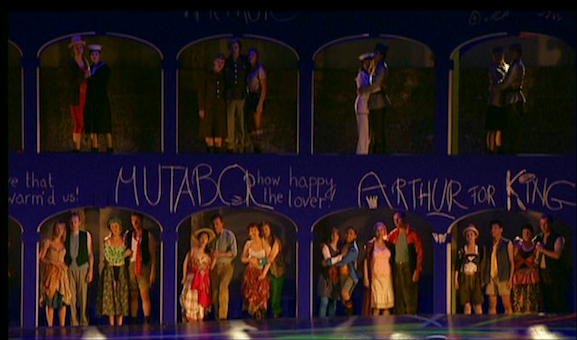 The actors are excellent, especially in the physical department.  The stand outs are Henkel as Philidel who is totally charming and Rohrer as Emmeline who is brilliant throughout and really manages to look as if she is blind in the first two acts.  The singing is very good too. It’s shared out between sopranos Barbara Bonney and Isabel Rey, tenor Michael Schade, contralto Birgit Remmert and baritone Oliver Widmer. Some of the English intonation is less than perfect though Bonney and Schade are fine. The Staatsopernchor is consistently excellent and Nikolaus Harnoncourt directs his own Concentus Musicus Wien to good effect.  The vocal highlights include great performances by Widmer and Bonney in the frost scene and the final three numbers.  Here we first get Schade doing a rock and roll version of “Your Hay it is Mowed” (while the ladies of the chorus throw their underwear at him) followed by a ravishing “Fairest Isle” from Barbara Bonney and concluding with a really good arrangement of “How Happy the Lover” for all five soloists and chorus.

The invention; visually, dramatically and musically never lets up and we get a succession of scenes which are spectacular, dramatic, funny or sometimes all three.  It’s great fun and great theatre. 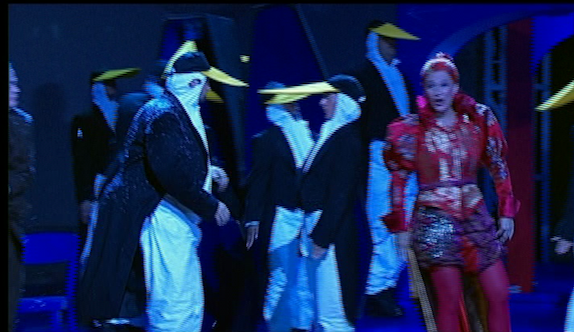 The video direction is by Hannes Rossacher and it is very much “for TV” which is a shame as I think a lot is being lost by seeing too little of the complex and imaginative “picture” the director and designer intended. Technical quality is OK given the date of the recording. The picture is 16:9 and the sound options are PCM stereo, Dolby 5.1 and DTS 5.1. There are English, French and German subtitles. There are no extras but there’s a detailed track listing and a useful essay in the booklet. 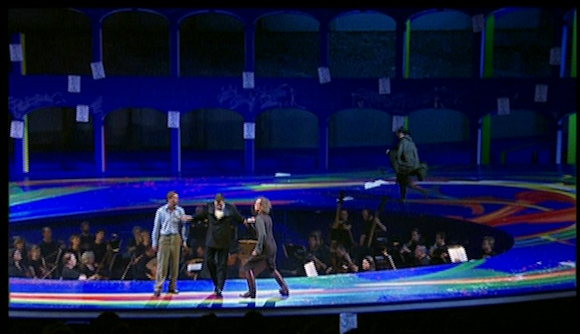 All in all, this DVD is a lot of fun and can easily be recommended.

Second thoughts on this production, July 2013.

10 thoughts on “How to do Purcell”