Die Entführung aus dem Serail is probably the major Mozart opera I know least well so I don’t have too many comparators for this performance from Amsterdam by De Nederlandse Opera from 2008. So I can’t say that this is better or worse than other available productions but I can say I enjoyed this one immensely.

The production, directed by Johan Simons, uses fairly uncluttered sets and costumes that switch between pantomime Aladdin and, most of the time, modern dress. The take on the characters is interesting. Osmin is pretty much the classic infatuated old Turk, played brilliantly by Kurt Rydl, but the infatuation is reflected by the distinctly dominatrix like Blonde played by the rather lovely Mojca Erdmann in kinky boots, a tight short skirt and a belt that she’s quite prepared to use on the men in her life. At least in the first two acts there’s plenty of ambiguity in Laura Aikin’s Konstanze. Is she actually at least a little bit in love with Bassa Selim, played very well by Martin van Westmeulen. Certainly she has him twisted around her little finger and in Martern aller Arten seems to be very much “topping from the bottom”. To round the cast out, Michael Smallwood is a cheeky chappy Pedrillo, very much under Blonde’s thumb and Edgaras Montvidas is a suitably sappy Belmonte. It’s mostly fast paced good fun but does strike a more serious note in the final scenes. Funny how that always seems to happen with Mozart “comedies”. 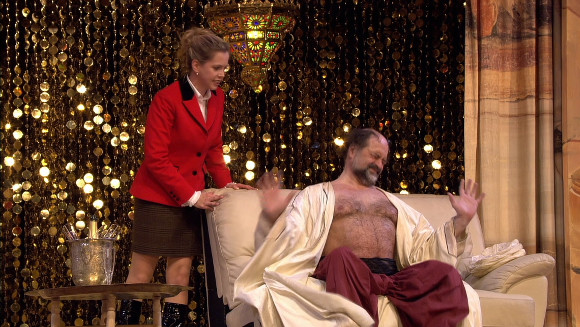 Musically it’s pretty good too. Constantinos Carydis conducts a fast paced and nimble reading from the Netherlands Chamber Orchestra. The vocal star is clearly Laura Aikin who has the difficult coloratura parts of Konstanze’s music nailed. This is particularly praiseworthy as she does it while doing some pretty intense physical acting. It can’t be easy to nail Martern aller Arten with Bassa Selim firmly lodged in your cleavage. The men are perfectly adequate. I thought Michael Smallwood was particularly sweet toned. The one weakness, and I hate to say this, was Mojca Erdmann. Her upper register is a bit harsh and shrill. This is surprising as most reviews of Ms. Erdmann praise her beauty of tone. Maybe she was just pushing a little too hard in this performance. The ensemble work was generally first class. 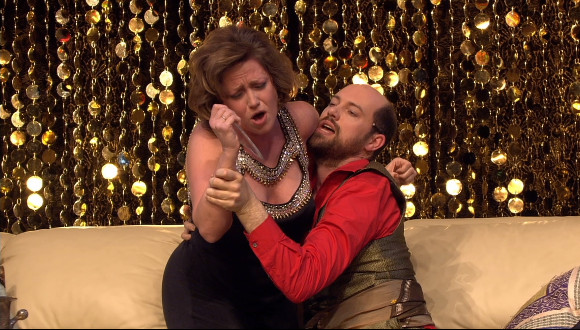 The recording is available from Opus Arte on DVD and Blu-Ray. I watched the latter using the Dolby TrueHD 5.0 soundtrack. The picture is 1080i HD 16:9. It looks and sounds great on my system and would doubtless look even better on a more modern TV. Definitely worth a look.

2 thoughts on “Kinky boots and all”