Verdi’s Il Trovatore is always pretty grim.  It’s hard to lighten up an opera with multiple executions, suicide and babies being barbecued.  David Bösch in his Covent Garden production (remounted and recorded in 2017 with Julia Burbach directing), probably wisely, doesn’t even try.  This is as grim as Grimsby on a wet Sunday in February with extra gratuitous violence.  The setting is some roughly contemporary civil war.  The Conte di Luna’s troops are a scruffy lot but they have a pretty cool looking tank.  The gypsies are a bit gayer though Azucena’s caravan is disturbingly plastered with baby dolls reflecting her obsession.  It’s all quite dark.  Really only Leonora (and her maid) stand out as they wear white in contrast to the greys of pretty much everyone else.  The story is told straightforwardly enough and the sets and costumes do provide some kind of moral differentiation between the two camps with Leonora sort of standing above and apart from the violence. 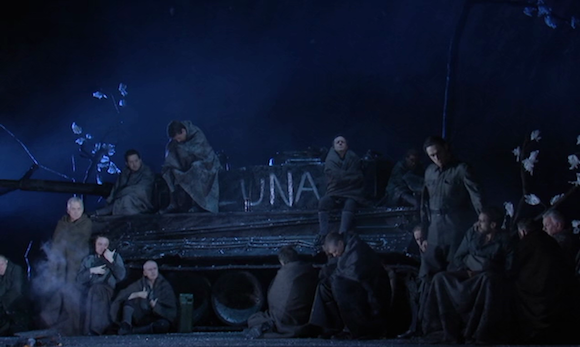 But really the point of Trovatore is the singing and that old Caruso saw about it just needing the four best singers in the world.  This one maybe doesn’t have quite that but it’s pretty good.  The stand out is Anita Rachvelishvili as Azucena.  She’s incredibly intense.  Quite chilling in fact,  Vitaliy Bilyy is a very effective Conte.  He sings like a proper Verdi baritone and is convincingly nasty. 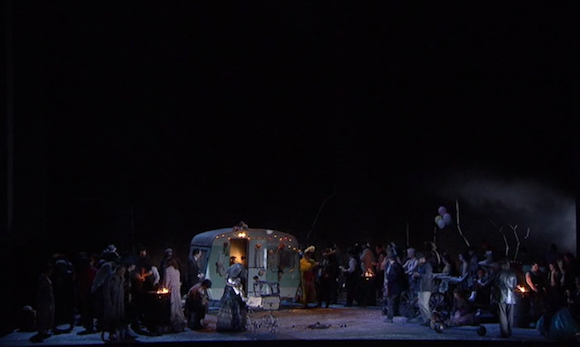 Lianna Haoutounian probably doesn’t have the heftiest voice ever to sing Leonora (but then neither does Sondra Radvanovsky and she’s terrific in the role) but it’s very appealing and fits the production.  There’s a fragility to her persona that the opera needs, especially when the grimness has been ratcheted up to 11.  Gregory Kunde is a convincing Manrico but perhaps not the most Italianate of tenors. 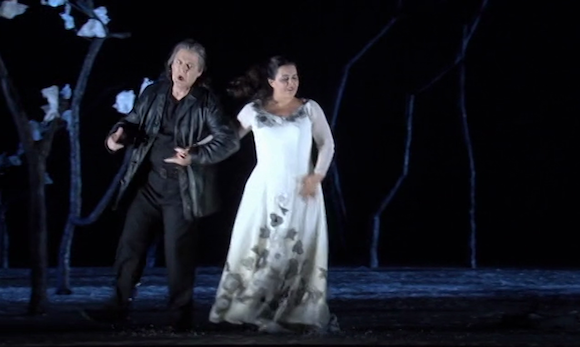 The support is good with a strong performance by Alexcander Tsymbalyuk as Ferrando and a nice cameo from Francesca Chiejina as a sweet toned Ines.  The chorus, so important in this opera, is excellent throughout.  Richard Farnes conducts and it’s all suitably dramatic.  Musically I think this is a very satisfying disk. 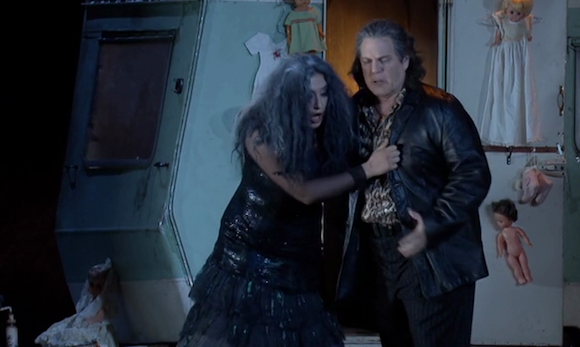 Bridget Caldwell directed for video.  It’s a judicious job.  The big scenes are captured well and even on DVD she seems to cope well with the overall darkness.  This is also available on Blu-ray and that should be even better.  Sound quality (DTS and LPCM stereo) is fine.  There are about ten minutes of interviews and rehearsal footage included as extras and they are worth watching.  The booklet was missing from my review copy.  Subtitle options are English, German, French, Japanese and Korean.

The principal competition for a “straightforward” Il Trovatore on video is probably the Met version with Hvorostovsky and Radvanovsky.  It’s very good but not currently available on Blu-ray as best I can tell.  It’s also MetHD standard video direction and not as good as this disk.  Bösch too offers a grimmer, less romanticised version than MacVicar.  Overall not much to choose between them.