Eclipse Theatre opened a run of Kander and Ebb’s musical version of Kiss of the Spider Woman last night at the Don Gaol.  Now, as most of my readers now I’m not any kind of expert on musical theatre and being there last night was a result of intrigue at the subject matter and the location and the kind insistence of Ashley, Eclipse’s media person.  Anything I say about the work then should be filtered through the “does this guy know what he’s talking about?” filter.

Now all that said I’m a big fan of Ebb and Kander’s Cabaret though admittedly that was written a quarter of a century earlier.  Kiss of the Spider Woman seems to me to lack the elements that made that work so successful.  There’s not a single tune I remember from last night and I didn’t see the same sense of irony or, oddly given the subject matter, the same sense of menace as in Cabaret.  It just seemed like another Broadway musical with a formulaic plot, tuneful but forgettable music and rather dull, predictable lyrics.

That said, Eclipse’s production made the most of it and the truly scary space it was staged in.  The rotunda at the Don Gaol is claustrophobic but very high with at least two galleries circling the small floor space.  Somehow Eclipse managed to cram the performance space, the sound desk and 105 seats into the available area.  Full use was made of the gantries and the ability of some of the cast to move between levels incredibly fast was pretty impressive.

There was a lot of movement and dance.  Much of it seemed very Broadway cliché to me (step, step kick; step, step turn etc) but it was extremely athletic and it can’t have been easy to make that work in the space without kicking anyone in the face.  Also there was very limited rehearsal time so maybe it had to be worked up from stock tropes.  In any event, it was extremely well executed.  Tracy Michailidis, playing Aurora, is a hell of a mover and the ensemble was very crisp too.

The acting and singing was very good too.  Kawa Ada, as Molina, and Jonathan Winsby, as Valentin, created and developed their characters skilfully and the singing was fine, though I’m no great fan of the miked Broadway approach.  Michailidis managed to be exotic and sexy and “deadly” all at the same time and somehow flit between levels and make umpty umpt costume changes without ever seeming hurried.  The supporting cast looked and sounded fine too. 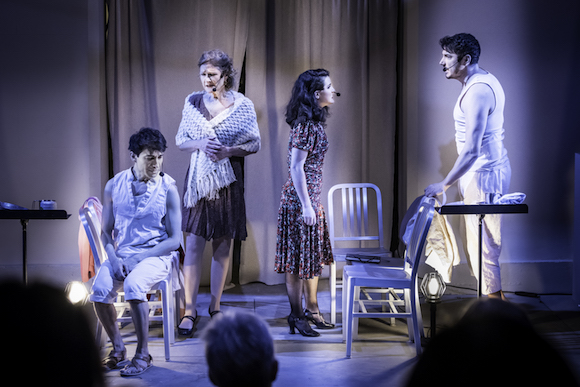 I’m assuming that director Evan Tsitsias was also responsible for the lighting design as no-one else is credited. Nick Blais was responsible for the lighting, as well as sets and costumes.  The use of back lighting and shadows was highly effective and amplified the brutality of the space.  Full credit too to music director Chris Barillaro and sound designer Jeremy Mitchell for achieving a high degree of coherence in a really difficult space. 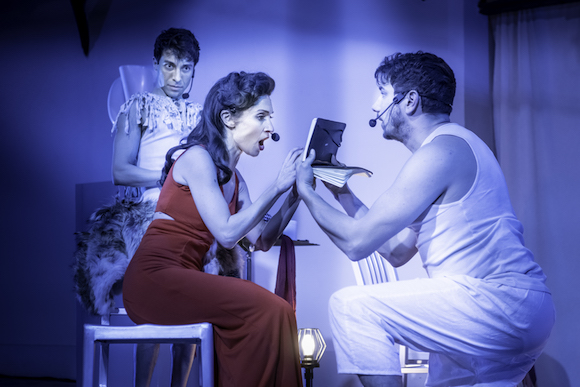 So there you have it.  It’s not really my thing musically but it was well done and interesting to see in that space.  If you are into musicals I think you should go see it.  Maybe you should, even if you aren’t, because you are not going to see many performances in that intriguing space.

Kiss of the Spider Woman by Eclipse Theatre runs at the Don Gaol until March 10th.

2 thoughts on “Kiss of the Spider Woman”

Leave a Reply to a Cancel reply