Yesterday at noon we had the traditional season opening performance by the COC Ensemble Studio in the RBA; the Meet the Young Artists concert.  There were two new singers and a new pianist joining six members returning from last year.  First up was Danika Lorèn with Deh vieni non tardar.  I think I’ve run out of new things to say about Danika.  It’s all there; a very easy upper register, interesting colours and a growing degree of artistic assurance.  I just want to see her on the big stage.  Stéphane Mayer was at the piano with his usual sympathetic elegance.  He really is rather good! 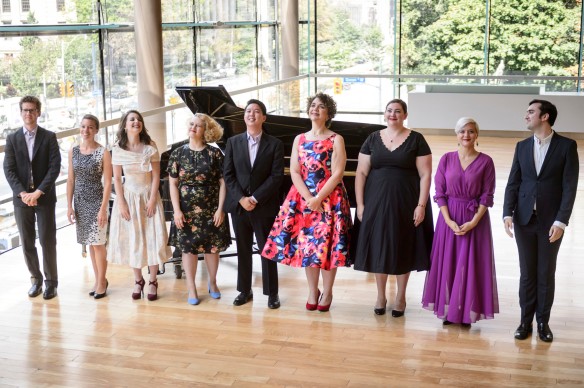 Samuel Chan was up next with Questo amor,vergogna mio from Puccini’s Edgar.  I was impressed.  This really sounded like Puccini which is quite a feat for a young baritone.  I think there’s a really big, bold voice developing here.  One to watch.  It was also my first look at Rachael Kerr at the piano.  She’s clearly very accomplished but hasn’t, yet, got me quite as excited as Stéphane.

Samantha Pickett sang Non so le tetre immagini from Verdi’s Il Corsaro.  She’s definitely coming on as a singer and actress and could end up with quite a dramatic voice.  Right now her upper register still gets away from her a bit but that’s a common problem that can be tamed.

Megan Quick sang Mon coeur s’ouvre à ta voix which is the one bit everyone knows from Samson et Dalila.  What can I say?  I just wallowed in the wonderfully beautiful tone.  She probably needs to get a bit more precise with diction and so on but heavens it’s a beautiful and unusually rich voice.

Lauren Eberwein is making the switch from mezzo to soprano and it’s a bit of a work in progress.  I’ve always been impressed by her musicality but her version of Ach, ich fühl’s didn’t quite have the effortless upper register needed.  I’m really curious to see her upcoming performance of the Schoenberg Second String Quartet; a very different piece and perhaps better suited.  We’ll see.

Bruno Roy gave us the tower scene from Pelléas et Mélisande.  There’s more power in the voice than when he joined the Ensemble but the real difference seems to be in his confidence and stage presence.  This was really quite an impressive piece of singing/acting.

Finally there was Simone McIntosh, the newbie mezzo, with Una voce poco fa.  This really was fun.  She was obviously enjoying herself and absolutely threw herself into a wonderfully cheeky bravura performance that brought the house down.  Would the Mastersingers’ Guild have banged in a few nails for slightly slurred descending runs?  Perhaps, but who cares!

Overall, I got the impression that this was one of the strongest starts to the year by the Ensemble Studio in a while.  It will be interesting to see how things develop.

2 thoughts on “Meet the Ensemble Studio”