Schubert could write great melodies and he had a real affinity for the voice so one might expect him to have been successful when he turned his hand to opera.  He wasn’t with Fierrabras which wasn’t performed until decades after his death and has been revived seldom since, most recently at Salzburg in 2014 where it was recorded. It’s easy to see why.  The libretto is awful and even if the music were really amazing, which it isn’t but more of that later, I doubt it would have made much impact.

Part of the problem is the plot which sets a convoluted double love story in the context of Charlemagne and Roland’s war against the Moors.  There are far too many odd coincidences, the portrayal of the Moors (except for Fierrabras and his sister) is as cartoon book, moustache twirling (and very swarthy) villains while the Christians are fine upstanding French knickets who seem always about to break into a chorus from Spamalot. and all the exciting bits are narrated by someone looking out of a window.  Add to this the general implausibility of the title character who is utterly worthy but never gets the girl (Michael Schade claims it’s based on Schubert himself) and it’s just not very operatic.  Director Peter Stein claims to have abridged and rewritten the dialogue (it’s a Singspiel) to clarify the plot but it’s still a hot mess.

So, what to do with it?  Stein (and conductor Ingo Metzmacher’s) answer is to downplay the drama and the visuals and let the audience concentrate on the music.  The production is literal and uses fabric flats in early 19th century style.  It’s very black and white literally and figuratively (white Christians, black Moors natch!).  The aim, apparently being to create a series of tableaux vivants as a kind of backdrop to the music.  It’s not a bad idea but it’s not enough.  Partly it’s because the music is decent but rarely more.  There are some OK choruses and some very ho-hum rumpty tum ones.  Some of the arias would probably make quite decent lieder but a string of lieder does not an opera make.  Basically nothing can save us from the awful libretto!

And yet for this the Salzburg Festival assembled a really good cast and threw in the Vienna Philharmonic.  There really are some fine performances.  Georg Zeppenfeld manages the required regal nobility as Charlemagne.  Julia Kleiter and Benjamin Bernheim sing very nicely and are quite affecting as one pair of lovers and Markus Werba and Dorothea Röschmann as the other pair; Roland and Florinda, the Moorish prince’s daughter manage to up the Heroic and Romantic Impetuosity scores.  Props too to Michael Schade (and lots of bronzer) for making a pretty decent fist of the rather unrewarding title role where he gets to be a sort of head prefect of the pijaw variety.  The orchestra and chorus sound great too.  But, see last line of previous paragraph. 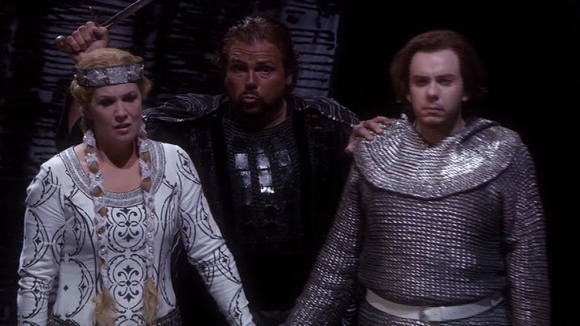 The recording was made in HD and is available on Blu-ray.  Even on DVD it looks and sounds very good.  The picture is top notch and the DTS 5.0 sound track is perfectly adequate.  I’m not so sure about Peter Schönhofer’s video direction.  It’s not awful but he might have done better to have heeded Stein’s remark’s about tableaux vivants.  There are too many close ups of the wrong part of the stage!  There’s a short bonus feature which is worth watching as it explains both the creative team and cast’s frustration with the libretto and their strategies for overcoming its shortcomings.  I also like the use of explanatory plot frames during the overture.  Not at all a bad idea when a work is likely to be unfamiliar.  The booklet has a synopsis and track listing.  Subtitle options are English, German, French, Spanish, Chinese, Korean and Japanese.

So, in the last analysis it’s a curiosity.  It’s probably as good a performance as this piece is ever going to get so if one is  wildly curious about Schubert as an opera composer (I was) one might want to give it a go but, honestly, this one should have stayed in the Valley of Lost Things.