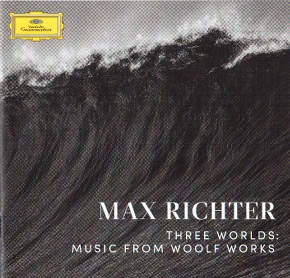 In some ways listening to ballet music without the visuals is even weirder than listening to opera without them but at least it’s easier to rearrange and abridge ballet music for concert purposes.  That’s the case with Max Richter’s Three Worlds: Music from Woolf Works which is his condensation of Woolf Works which he wrote for Wayne McGregor and the Royal Ballet.  As the name suggests it’s inspired by the works of Virginia Woolf and has three movements based on three of the novels; Mrs. Dalloway, Orlando and The Waves.

The first movement; Mrs. Dalloway, is character driven.  The four parts represent the author and the characters Peter, Septimus and Sally.  The first part is a recording of Woolf reading in a 1937 BBC broadcast over a recording of Big Ben.  The Peter and Sally movements are minimalist and use a common figure.  Various forces; orchestra, piano quintet and electronics are deployed.  The Septimus movement is sombre with a sort of ground bass; bass drum?  elecronics? not sure.

Orlando; mirroring the transformations of the title character, is structured as variations on a theme and contains a selection of the variations used in the ballet.  All kinds of techniques are used to create a highly immersive sound world somewhat reminiscent of Philip Glass but quite individual.

The final twenty minute movement, The Waves, starts with an actress reading Woolf’s suicide note over a recording of the sea before a an elegiac violin takes up the melody line until it finally closes with the sound of Big Ben over the waves.

The recording features the Deutsches Filmorchester Babelsberg with Robert Ziegler conducting and the composer on piano and synthesisers.  There’s also a string quintet, assorted soloists, actors and a soprano, as well as straight and digitally reprocessed recorded sound.  The recording engineer has done a really good job of supporting the kind of immersive effect that the composer seems to be aiming for.  In fact, listened to on a multi speaker system it sounds like it was recorded that way though in fact it’s just a stereo CD recording.