Katie Mitchell’s production of Handel ‘s Alcina recorded at Aix-en-Provence in 2015 is extremely interesting.  It’s almost complete with maybe twenty minutes of the ballet music cut.  None of the ballet is actually staged as such.  It’s also a Mitchell special multi-space set (like Written on Skin) with the lower level having Alcina/Morgana’s boudoir, drawing room or whatever at any given moment flanked by two smaller spaces which are the “personal” spaces of the two sisters.  When the ladies withdraw from the public/enchanted space they are replaced by actresses who look decades older.  Only late in the piece as Alcina’s magic fades do the two worlds get confused.  The upper level of the set is taken up with the giant machine that turns Alcina’s victims into taxidermied animals.  The overall aesthetic is upscale modern with lots of actors as very competent servants. 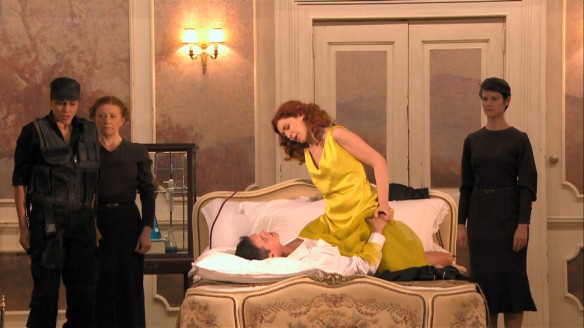 The story is told fairly straightforwardly but it’s definitely heavy on the sex and seduction, which really seems pretty reasonable as that does seem to be Alcina’s raison d’etre.  One twist is that Morgana is decidedly kinky.  Very early on she has herself tied up and “stimulated” by Ricciardo/Bradamante with a feather duster.  Later he/she has to be shown what to do with a riding crop but is still the worst top in opera history.  Morgana’s reconciliation to Oronte is resolved by the submission to him of both her young and old selves.  He has considerably more idea what he’s up to than Bradamante. 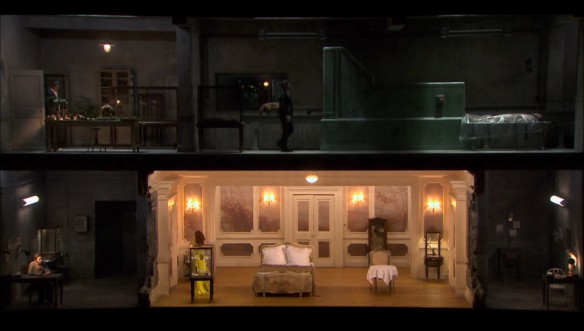 Generally the characterizations are very good.  Philippe Jaroussky’s Ruggiero is alternately infatuated and confused and his relationship with both Patricia Petitbon’s Alcina and Katarina Bradić’s Bradamante is convincing.  The latter is especially good in a fiery version of the “I’m a girl, stupid!” scene.  There’s also some interesting chemistry between Bradamante, Morgana (Anna Prohaska) and Ruggiero.  The supporting roles are very well played with special props to a very confident performance by Elias Mädler as Oberto.  I continue to be amazed at how European houses can find boy sopranos who seem quite able to handle the biggest stages.

The singing is of the highest order.  Jaroussky and Petitbon are stylishly assured and flawless.  Jaroussky is especially good in the later acts.  Verdi prati is gorgeous and Stà nell’Ircana pietrosa tana is not only heroically sung but the horns don’t sound like a flock of ducks farting.  Petitbon knocks over the big numbers with aplomb.  Bradić and Prohaska are equally good, as are the supporting roles.  The pit band is the Freiburger Barockorchester and the chorus is Perm’s MusicAeterna.  Both are very good indeed.  The orchestra has a very open, clear and detailed baroque sound and the music direction by Andrea Marcon is first rate.

Video direction is by Corentin Leconte.  It’s a bit annoying.  He’s much too fond of weird camera angles like overhead shots but it’s not bad enough to spoil the viewing experience. On Blu-ray the picture is excellent and the DTS-HD sound is top notch.  There are also PCM Stereo and Dolby surround tracks.  I’m not sure I get the point of including Dolby when the superior DTS is included.  This is one of those recordings where I would go for Blu-ray if I had any choice.  Light levels are often low and the stage is big.  I imagine this would rather easily dissolve into murkiness in DVD quality.  There are no extras on the disk and the booklet really only includes a very cursory synopsis.  Subtitle options are English, French, German and Italian. 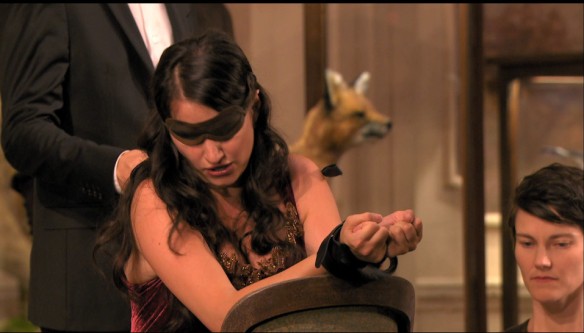 In summary, a most enjoyable disk with terrific singing and orchestral playing, an interesting and coherent production and lots of eye candy.  The main competition is the Vienna recording from 2011 which is a very different production but also excellent across the board.  If one had to choose one it would probably turn on whether you prefer the conceit of a performance in Georgiana Devonshire’s salon or Anna Prohaska getting her bottom smacked.

2 thoughts on “Alcina in Aix”